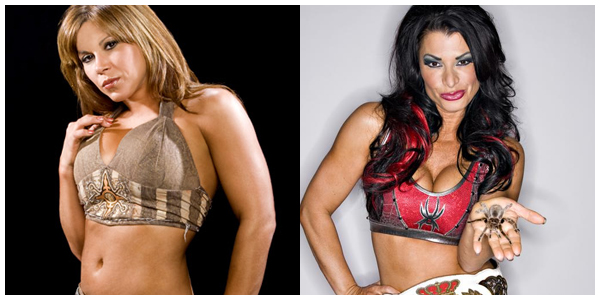 It’s funny how things can change so much in just seven days, yet still remain very much the same. Since last Thursday, it’s been one bombshell after another. In the last seven days, both WWE and TNA have made, I’m sure what they consider to be ‘wise business decisions’, in releasing Mickie James and allowing Tara to slip through their fingers. It is odd to watch this as a fan, as we effectively need to readjust the way we watch women’s wrestling on national television and prepare ourselves to no longer see two women, who combined, have probably entertained us for some 12-13 years. When it rains, it pours, right?

I say that things still remain the same because though these two extremely popular women have moved on or are going to move on, the status quo remains unchanged and that status quo is that the women aren’t considered as valuable as the men. Who’d have thought that Mickie James, the heir apparent to Trish Stratus‘ throne, would leave under any circumstance other than her own? James seemingly had a meal ticket for as long as she wanted and seemingly had a send-off somewhere between Trish’s and the then-Victoria‘s whenever she did hang up her boots. Where did it all go wrong? I’m sure you’re reading much speculation on the Internet, but it baffles me that WWE would dismiss the fact that Mickie was the most popular Diva in the WWE with audience reaction far more than that of some of the men they seem intent on pushing to the moon. Perhaps Mickie’s release should have been foreshadowed when WWE pulled a similar stunt in February, releasing Maria Kanellis, also extremely popular as proven by the fact that she won a worldwide fan vote for ‘Diva of the Year’ in December. Are the women that expendable? Are they that interchangeable?

What is scary about this situation is that it sets a precedent — a new, all-time low benchmark for the Divas who give their lives to the company. Obviously there are hardships in life on the road and the likes of Trish Stratus, Lita and Victoria didn’t have it any easier in that respect to the women today, but they had rewards for their dedication. They often had T&A ‘fluff’ matches but they also had moments like main eventing Raw, great storylines, meaningful title wins. But most of all, they had the opportunity to leave the WWE with dignity — with their heads held high. WWE can’t even afford the same to the Divas of today. The present crop of Divas travel just as long and gruellingly as those aforementioned, yet their rewards for that dedication are a mere fraction of what the Divas once had. Maria Kanellis, in an interview with us, put it perfectly: these girls are paid a fraction of what a real actress in Hollywood would make for a similar acting job, yet they’re expected to travel 300 days a year, paying for their own hotels/cars and even when all is said and done, there’s no guarantee that they’ll even get to be on television. And if they are on television, it’s usually not for very long. What’s the point in that? And now comes this new precedent. The one thing that was classy about the Divas division was that some of these tenured workers got the same treatment as the men in one regard, they were allowed to leave the company on their own accord and with dignity. We can’t even afford them that courtesy anymore. It’s just like, “Thanks for five years and being our most popular Diva but we’re going to tell you to eff off now.” Who is to say that girls like Beth Phoenix or Melina won’t be treated the same way as Mickie? Discarded like trash instead of being given the dignity of a farewell.

Then we have Tara, one of the most respected women in wrestling over the past several years through her work with WWE. A veteran who has given us great matches and is truly a professional. I don’t know what the situation is for sure, but it seems to me that her situation is not unlike Gail Kim — top Knockout, want a little bit more money but they say no. Why? I don’t know. Maybe they saw dollar-signs when they heard Funaki and Slam Master J were released by WWE? But again, another situation where the status quo goes unchallenged. Is it more valuable to have a lower-tier guy who used to work for WWE or WCW than to have a top-card Knockout in a division that draws ratings? Tara’s financial situation with TNA is not unheard of — TNA has already been down this garden path with Gail Kim in 2008 and they also lost Awesome Kong earlier this year partly because of money issues too. How many top Knockouts need to leave the company before TNA gets it? They probably don’t even know what ‘it’ is.

Once again — are the women that expendable? That interchangeable? “We’ll just let our top Knockout walk out, we can get another one.” It is this attitude that pisses me off more than anything.

So yes, it’s been an interesting week and there’s been a lot of change — but when you look closer, have things really changed?