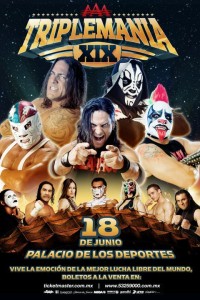 Mexico’s AAA promotion held its biggest show of the year, TripleMania, yesterday in Mexico City, with plenty of visitors from TNA on hand.

It was the Knockouts Champion, James, who picked up the win over Faby Apache with her patented Mickie-DT.

Results below courtesy of our friends at Superluchas.net. (Note: Results translated via Google, but you get the general idea.)

Lolita is the first to enter the action with a good reception from the male audience, followed by Cinthia Moreno and Apache with the same warm welcome as always.
¡Angelina y Velvet aparecen en equipo como “The Beautiful People”!
Mickie James with his championship comes to the ring and say hello to Angelina and Velvet.
Sexy Star arrives at the Sports Palace in a car and enters the ring with the entry most elaborate of the night.
It introduces the “straps” as a referee of the fight.
The whistle blows and the fight with the team of TNA attacking the Mexicans.
The attack wounds three Moreno and removed from the ring.
Are now behind Faby Apache with the same dose and end with Lolita.
Sexy Star attacks and it pulls brown hair, James Star helps to have the edge and succeed.
Velvet and Angelina attack Faby Mary but get them out of the ring.
Lolita Mary comes to help and take the ring to Star and James, now with help from the public yell “out” to the straps.
The rules are normalized and Mickie James faces Faby.
Faby sent James to the corner but James gets elbow and applies with scissors, looking top rope but Apache is removed and she who fails to implement flying kicks off the top rope.
Relay for Star and Lolita.
Lolita Star knocks and out of the ring to take over from Mary.
Angelina Angelina gets to face and applies a Swantom.
Relay for Velvet, but James manages to apply “crippling.”
A series of falls and false ring to it does apply Velvet flying kicks to the face to Lolita.
Mary Star sends the third tensor and low with scissors.
Faby Apache Star applied to a broken neck but the referee does not get to count.
Mary takes the opportunity to dive into a mortal to the rough, Lolita does the same with a cannonball.
In the ring are Faby Apache and James but James pulls hair and braces defends it.
James accidentally kicking straps.
James kisses her Apache and DDT applied in this way to win.
TNA team defeated the AAA.
End the gun fight and a fight that leads to the girls backstage TNA to pursue to the AAA.