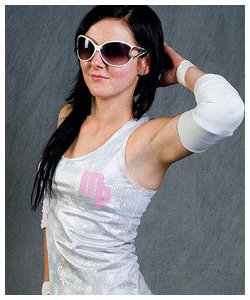 Just as an advisory to fans planning to attend European/British promotion Pro-Wrestling: EVE on October 16th in Sudbury, Suffolk, the company has announced that it has parted ways with ‘The It Girl’ Melanie Price.

Price, who ranked #33 on our third annual 50 Sexiest Divas list, was one of the original talents that took part in the first EVE show in May and was previously advertised as being on the latest card. It looks as though a dispute between the two sides has occured and as of now, she is no longer on the show.

“Pro-Wrestling:EVE and Melanie Conneely AKA Melanie Price have parted ways as of September 30 2010.

EVE sought resolution with Miss Conneely in an attempt to see her fulfil the agreed and scheduled appearance for the Oct 16 taping’s so no fans were left disappointed in her not attending however this could not be arranged.

Pro-Wrestling:EVE would like to apologise for any inconveniences caused to any fans planning to attend on the basis of the appearance of the character of Melanie Price.”

Still on the card however, are the likes of Britani Knight (one of our Five to Watch for 2010), Saraya Knight, Jemma Palmer, Alpha Female and more. You can pick up tickets here.