AIW to Debut on iPPV Tonight with “Girls Night Out 8” 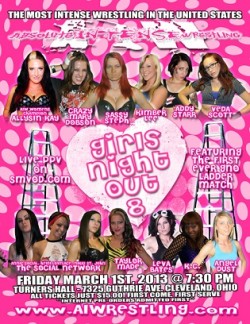 Absolute Intense Wrestling are set to make their internet pay-per-view debut tonight with the next installment of their all-women series, “Girls Night Out 8”.

The main event will see Allysin Kay defend her AIW Women’s Championship against a mystery opponent that will be announced during the show. No real clues have been given as to whom it might be, and speculation remains rife, but whoever it is, Kay will certainly be ready, having defended her title several times, most notably against Mia Yim (whom she won it from in the first place) in a brutal steel cage match at the last “Girls Night Out” show back in August.

As if that wasn’t enough, the next number one contender for the championship will be decided tomorrow night, with four “Climb the Ranks” qualifying matches taking place throughout the show, and the winner of each facing off in a four-way ladder match later on that night.

See below for the full card and details of how to order the show:

* Absolute Opportunity Match for a place on the AIW Roster:
Jodi D’Milo vs Angelus Layne