Aja Kong Returning to US for Chikara 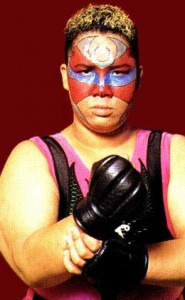 Chikara has announced a major name will be debuting for the company in December: Japanese legend, Aja Kong.

Kong will debut as part of Chikara’s ‘Joshimania’ event which will also feature the return of Manami Toyota, who took part in the King of Trios tournament for the company earlier this year.

Kong is a highly decorated star in Japan, holding championships in All Japan Women’s Wrestling, HUSTLE, and GAEA Japan.

To fans more familiar with American names, Aja is a former tag team partner of WWE’s Kharma, who competed as Amazing Kong in Japan. According to her Wikipedia, Kharma “was given the ring name Amazing Kong by Masatsugu Matsunaga, who needed a replacement for Japanese female wrestler Aja Kong in several matches.” Together, the two Kongs were known as ‘Double Kong’.

Aja is a 20+ year veteran in the ring and was inducted into the Wrestling Observer Newsletter Hall of Fame in 2006.

More details on Chikara’s Joshimania event as it becomes available.