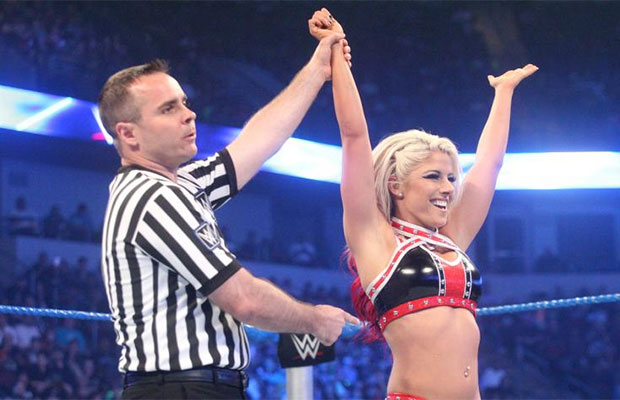 This month Alexa Bliss sheds her resting Bliss face and appears on the cover of Muscle and Fitness Hers magazine. Ready to continue taking SmackDown’s women’s division by storm later this month, she recently spoke to For The Win on USA Today Sports where she discussed what it was like to appear on that cover, her transition from NXT to SmackDown, her upcoming chance for gold at Backlash and more.

On adjusting to the main roster after NXT: “It’s working in front of a bigger crowd, but the bigger adjustment has probably been switching schedules. We kept a very busy schedule in NXT, but it was more group oriented. You just assume everyone in NXT is going everywhere. Now everyone gets their own schedule with where to be on what day. I like it better. It’s a lot easier to work on my own schedule in when I’m working out, when I’m getting in the ring and training on off days. We also [do more live television]. It’s a little nerve-wracking but also exciting. It makes me think more about what are the things I can apply in the ring, but I am comfortable without having a safety net.”

On preparing for the six-pack challenge at Backlash: “My preparation is focusing less on the other women in the ring. I’m focusing on how this is the first-ever SmackDown Live women’s championship and what I can do to the best of my abilities to make sure I’m the last person standing. The other girls can do what they can do, but it’s not going to match up to what I’m going to do.”

Backlash is set for Sunday, September 11th at 8 pm ET on the WWE Network.

Will you be picking up Alexa’s Muscle and Fitness Her’s edition? What do you think is in store for the spiteful one on SmackDown? Sound off in the comments below.