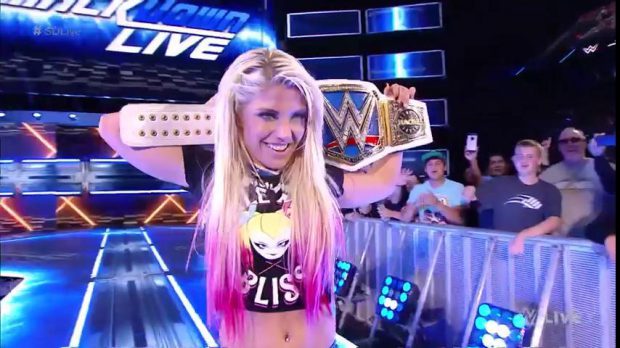 During the opening of SmackDown, General Manager Daniel Bryan invited Naomi to the ring to address the rumors surrounding her injury. Naomi would join Daniel in the ring, where it was revealed that due to Naomi’s injury, she would have to relinquish her belt.

Naomi said she was crying tears of joy last week but now a week later, is full of sadness and frustration. She added that she knows giving up her title also means possibly giving up her ticket to appear at WrestleMania. Naomi ended the tearful segment by promising that everyone would feel the glow once she returned.

Daniel would then book a Women’s Title match between former SmackDown Women’s Champions Alexa Bliss and Becky Lynch to crown a new champion.

With a blow to @BeckyLynchWWE's throat and a roll-up, @AlexaBliss_WWE has REGAINED the #SDLive Women's Championship!!! pic.twitter.com/ZRPKR0MpwH

During the back and forth back Women’s title match, Alexa Bliss would steal the win and belt by landing a cheap shot to Becky behind the referee’s back and rolling up the Lass Kicker for the three count.

It looks like @MickieJames and @BeckyLynchWWE's rivalry is FAR from over… #SDLive pic.twitter.com/L2axLXiTIJ

Mickie James would appear post match to briefly congratulate Alexa before going after her rival Becky but the Lass Kicker managed to fend off Mickie.

What did you think of the match? What are your thoughts on Naomi relinquishing her Women’s Title? How do you think this impact WrestleMania? Let us know in the comments below!