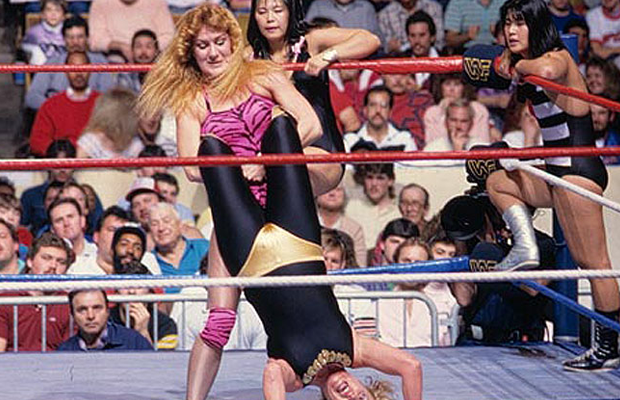 The only female team on the list was from 1987, when Sensational Sherri led Leilani Kai, Judy Martin, Donna Christanello and Dawn Marie Johnston against The Fabulous Moolah, Rockin’ Robin, Velvet McIntyre, Itsuki Yamazaki and Noriyo Tateno at the first Survivor Series.

Sherri’s team left a lot to be desired, according to WWE.com. They explained their choice in saying:

Nineteen eighty-seven wasn’t exactly a banner year for the women’s division, as then-Women’s Champion Sensational Sherri demonstrated with her assemblage at the first Survivor Series. Though the WWE Hall of Famer smartly surrounded herself with WWE Women’s Tag Team Champions The Glamour Girls to face a mostly youthful five-lady team captained by The Fabulous Moolah, it seemed as though Sherri had trouble rounding out the unit beyond her fellow titleholders.

Enter Donna Christianello and Dawn Marie. Cagey veterans though they were, Christianello and Marie had all but vanished from WWE in 1987. Their inclusion at WWE’s second-ever pay-per-view felt random and left some fans wondering if Sherri had discovered them day-of slinging Happy Waitresses at an I-77 truck stop diner. Against a team that included the dynamic and fast-moving Jumping Bomb Angels, their traditional offenses appeared wholly outdated. Needless to say, Sherri’s team wasn’t a winning one.

Watch the match below and judge for yourself:

Do you agree with WWE.com’s pick?