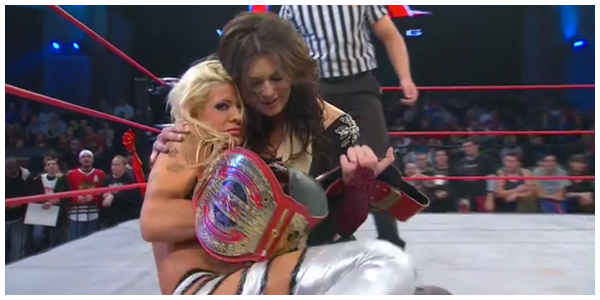 The bond between Angelina Love and Winter grew a lot stronger last night on Impact as the former Katie Lea helped Angelina become one half of the new Knockouts Tag Team Champions.

In the finals of the Tag Team Championship tournament, it was set to be Angelina & Velvet Sky (The Beautiful People) taking on Madison Rayne and Tara. However, after a brutal beatdown at the hands of Sarita (with help from a leather strap) earlier in the show, Sky was unable to compete.

Instead Angelina went it alone for much of the match, taking punishment from Tara and the Rayne, until Winter ran down to ringside in her first appearance inside the Impact Zone and took Sky’s place.

Winter picked up a hot tag and a decisive victory over the Knockouts Champion allowing herself and Angelina to pick up the Knockouts Tag Team Championship.