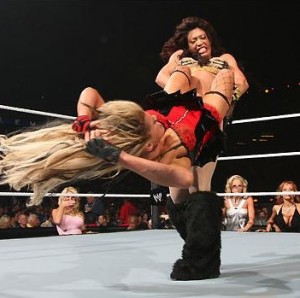 Former WWE Divas Ashley Massaro and Melina, who were reunited on last night’s episode of AfterBuzz TV’s Raw After Show, revealed on the program that their WrestleMania match for the Women’s Championship in 2007 almost didn’t happen.

Melina tells her fellow co-hosts, including former Divas Maria Kanellis and Jillian Hall, as well as former TNA star Becky Bayless, that they were almost scrapped while WrestleMania 23 was ongoing, despite the match being previously advertised.

The former five-time champion, who was in her first run as Women’s Champion at the time, was due to defend against Massaro, the then-Playboy covergirl, in a Lumberjill Match.

“We were not going to be on the card at all, but at the last minute [they said], ‘Here we can squeeze you in’,” Melina recalls.

The former Divas say they were waiting in the gorilla position (the area backstage nearest to the entrance way) waiting to find out if they were going to be able to compete.

The match did happen in the end with Melina retaining the Women’s Title.

Ashley also reveals that she broke her foot a week before the match.

The Ashley vs Melina match marks the last time the Divas competed in a singles match or a title match at WrestleMania.