Bayley on facing Nia Jax: “It changes everything” 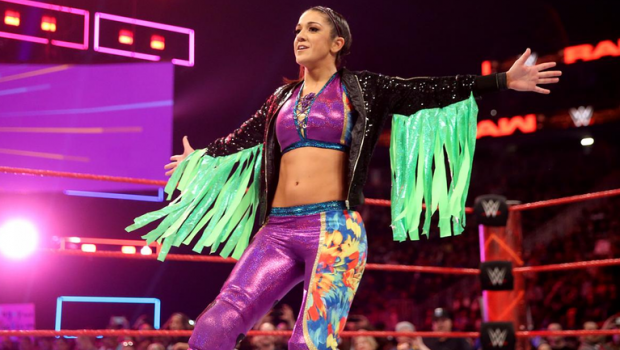 In one week, Raw Women’s Champion Bayley will defend her Women’s Title in a Fatal Four Way match against Charlotte Flair, Sasha Banks and Nia Jax. To help promote the show, Bayley spoke with Fox Sports to discuss how different it is facing Nia in the ring, last year’s WrestleMania triple threat match between Charlotte Flair, Sasha Banks and Becky Lynch and her recently filmed Snickers commercial. Highlights of the interview below.

On watching last year’s Women’s Triple Threat Match: “I was very happy, and super emotional. I was getting a little anxious the more and more the match went on, and the wrestler in me was like ‘ah, I wouldn’t have done that,’ or ‘ah, I wish I would have done this!’ Little things like that.But then, also, I just wanted to be a part of it. A part of me was a little jealous, honestly. They were able to do all this cool stuff. I don’t know, I just felt like ‘man, if I was there, it would be so much better.’ I just wanted to be a part of it. I felt a little bit left out, but there were just so many emotions. I cried for all of their entrances because I’m such a loser. ‘Oh, that’s so cool!’ I was really happy for them, but I was so determined after that night. I went back, hugged them, and congratulated them. And then I was like ‘time for me to go to work.’”

On stepping in the ring against Nia Jax: “It changes everything. I’m still getting used to it. When she came to NXT I was like ‘alright, this is a cool new challenge.’ I’ve never been in the ring with somebody like her. But I’m still – it’s been like two years – but I’m still learning how to actually approach her. Once you think you have one idea of how to do it… she’s just way too powerful. Our match on Monday, I was honestly worried about it being a no-DQ match. My neck still hurts, and it hurts to drive and to look the other way. It’s a challenge so I’m up for it. I’m building my muscle.”

On her Snickers commercial: “I had to mess it up a few times. Dude, it was so fun. They had a script for me, and as it was going on they were like ‘oh it would be cool if you did this,’ or ‘it would be cool if you do this!’ And I would sometimes not say the right line and they’d be like ’it’s cool, let’s try that one!’ Yeah, I had to mess up the room a few times. I threw so many cups at the assistant. We were using red cups before and they were like ‘nah, those don’t fly as good.’ I’m actually kind of sad because at the end we had the shot of me kicking the table… and we actually shot one where I was dropping an elbow onto the couch and I was kind of hoping they’d keep that one, but it was so much fun.”

What did you think of the interview? Have you watched Bayley’s Snickers commercial? Let us know in the comments below!