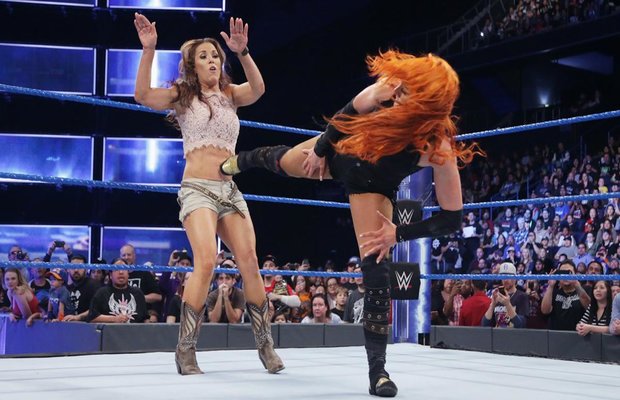 The rivalry between Mickie James and Becky Lynch is just getting started and tonight, it’s about to reach new heights. WWE announced that both women will face off tonight in a 2 out of 3 falls match.

TOMORROW NIGHT on #SDLive, @BeckyLynchWWE and @MickieJames will look to settle their score in a #2OutOf3Falls Match! But that's not all…

The preview for tonight’s SmackDown from WWE.com is as follows:

Since the Brand Extension, SmackDown LIVE’s Women’s division has been taking WWE by storm. Case in point: Last week, Naomi struck the emotional chord of the WWE Universe when she was forced to surrender the SmackDown Women’s Championship due to injury. Alexa Bliss recaptured the illustrious prize by overcoming Becky Lynch in a knock-down, drag-out battle, before Mickie James tried to take out The Irish Lass Kicker. In a Falls Count Anywhere Match that could have been a main event at any SmackDown LIVE pay-per-view, Nikki Bella went to war against Natalya before Maryse opted to add a vicious pipe assault into the mix.

Tonight is already shaping up to be just as good, as Becky goes one-on-one against Mickie in a 2-out-of-3 Falls Match.

The complete line-up for this week’s show will feature:

What do you think of this stipulation? Who do you think will gain the upper hand in this feud? Sound off in the comments below.