Best Moments from 2014: Stephanie McMahon Melts Down at Survivor Series 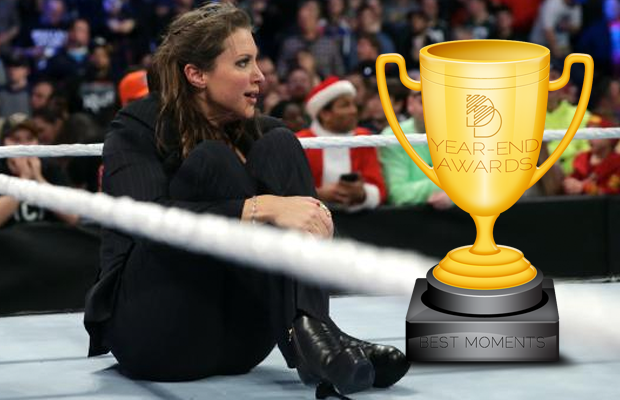 Stephanie McMahon has always separated herself from everyone else with her ability to draw an audience in, whether she is being a heel or working as a fan favorite. It was no surprise that when she returned to television for a long term run, fans were thrilled. We got to watch The Billion Dollar Princess in all her glory, running through the entire locker room alongside her husband, Triple H. Together, they formed The Authority and made the lives of Daniel Bryan, Brie Bella and Dolph Ziggler (to name a few) absolutely miserable. They used Kane, Randy Orton, Batista and Seth Rollins to do their dirty work and more often than not, Stephanie and her man came out smelling like a rose.

All was well with their world until Vince McMahon made his stunning return to television and basically put the powerful couple in a no-win situation. All Team Cena had to do at Survivor Series was survivor and Stephanie and Triple H would be stripped of their power once and for all. Tall order, right?

Well, Team Cena ended up decimated with John Cena himself getting eliminated and eventually it all came down to Dolph Ziggler and he was to face the rest of Team Authority all by himself. Stephanie and Triple H clearly grew in confidence. As Ziggler continued to fight on, their confidence wavered, but when the odds were even and it came down to Dawlf and their main man, Rollins, they knew they had it in the bag.

Ziggler and Rollins battled back and forth, each knowing they had no choice but to survive. Stephanie and Triple H both did all they could to make sure the victory was theirs. They asserted themselves in the match to make sure Dawlf couldn’t snatch victory from the jaws of defeat but the shocking appearance of a living legend brought the house of McMahon-Helmsley crashing down.

“The Icon” Sting made his much anticipated WWE debut and made sure Triple H was taken care of. He pulled Dawlf over the fallen body of Rollins, and yes, Dolph became the sole survivor for his team. Team Cena had won. Team Authority had lost. And because of that lose, Stephanie and Triple H lost all of their power. It was culmination of everything that had been meticulously built up for months and months. And when Stephanie shook the cobwebs off and climbed in the ring, she came to the conclusion that it was over.

The Queen of the WWE was now nothing more than a peasant, no better than the people who swept the floors after the shows. There would be no more Superstars or Divas to torture. There would be no more trips to Raw on the company jet. Everything was gone. The Authority was no more. Stephanie’s reaction was pure, vintage Stephanie. She was upset. She was horrified. She threw a fit. Triple H certainly couldn’t console his wife. Stephanie was just beside herself. The lasting image of her distress and pure emotion as Survivor Series faded to black is my favorite moment of 2014.