Beth Phoenix Comments on Awesome Kong Signing with WWE, the Possibility of a Match Together 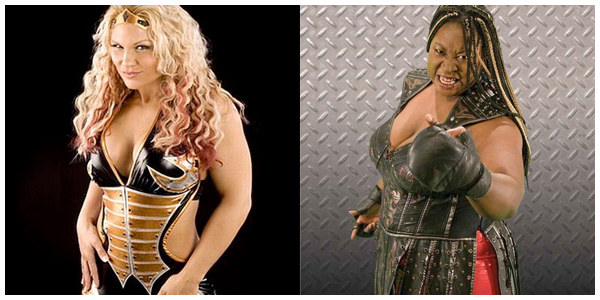 Former WWE Women’s Champion, Beth Phoenix was asked about Awesome Kong signing with the company in an interview with SLAM! Sports this week. By commenting, it seems the Glamazon is the first WWE Diva to publicly acknowledge Kong’s signing, as she speaks on the possibility of her and Kong working a match together.

“There’s been a lot of chatter around about her being signed by WWE. I think a lot of people, their first inclination is to think that it would be quite a clash to see us in the ring together. If we get that opportunity, it will be amazing. I look forward to it. She and I have never wrestled each other, not even on the independent scene or anything. I think it will be quite the spectacle to have Awesome Kong and Beth Phoenix in the same ring at the same time. Hopefully we’ll get to see that in the near future.”

Beth also commented on the unification of the Divas and Women’s Championships, and what that means for the Divas:

“I’m partial to the women’s championship, of course, having been women’s champion three times, and I haven’t had the chance to wrestle for the Divas championship as of yet. That is definitely something that is on my agenda. However, I think that having only one title for all the girls on both brands is going to put everybody onto their A game, because there’s fewer opportunities, fewer title chances. It just means you have to work all that harder to get that championship spot and wrestle for the championship. I think in the long run it’s going to make it more prestigious.”

She also touches upon the life of a Diva backstage in terms of getting ready for shows:

“I think that the life of a diva backstage is hectic. We have to do all the same things that the guys do, compete in the ring, and go out there and perform in front of the fans. But at the same time, we have to do it with very elaborate makeup and hair and costumes; sure the guys have great costumes, tights and gear too, but I would say there’s a little more makeup, hair, and all those beautifying things that maybe the guys don’t have to endure,” she said with a laugh. “Our costumes and our jobs are just a little more challenging, to keep your hair looking great while you’re flipping and flying around.”

You can read the full interview here

Thoughts: A lengthy interview with Beth and she touches upon a lot of topics that I didn’t include in this post. Just hit the link to read it all. Beth vs Kong is definitely a must-see match that I’m sure everyone can’t wait to see.