Beth Phoenix Speaks on Whether She Got Along with Melina, More on Wanting to Feud with Kharma 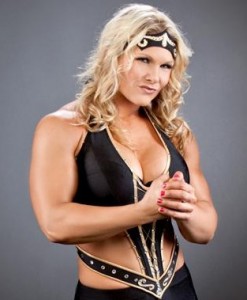 Another Beth Phoenix interview, this time with Brian Fritz at Between the Ropes.

In this interview, Beth discusses in more detail about wanting to work with Kharma before she left earlier this year due to her pregnancy.

I was really disappointed that things turned out that way because I was probably the most excited out of everybody (of Kong joining the company) because not only does she have this mystique about her but I can remember for years when she was doing things elsewhere that was always the comparison. That was my far off, distant dream opponent I supposed because I got asked more than anything else ‘what are you going to do when you meet Kharma’. At the time, it wasn’t a possibility but then when she came in, I was so excited because I was like wow, this could actually come true. This could actually happen and I think it would be something epic for the divas that we haven’t had in a long time. Nobody was more disappointed than me. (Source)

Beth was also asked about Melina and whether the former WWE Diva had any personality clashes with the others.

I never had anything but respect for Melina. I’m not a super social person. I have my best friend in Natalya. That’s who I stick to and I don’t go out and party or anything like that or socialize a lot with the other divas. You know, I didn’t really get to know her personality maybe but speaking from my own personal experience, I respect her very much and what she did and she has a great passion for this business. And I know whatever the future holds for her she’ll do a great job with it. (Source)

You can listen to the full interview at this link.

RELATED:
– Beth Phoenix Talks About Her Bond with Natalya, Wanting to Wrestle Kharma, Goldust Working with the Divas