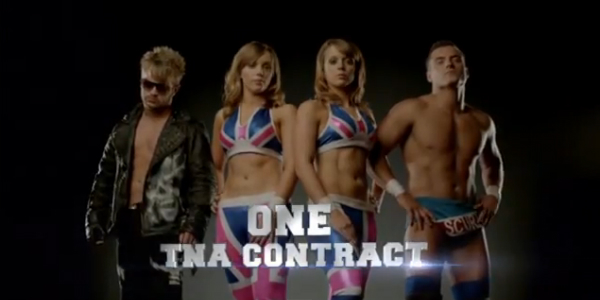 As previously reported, Hannah and Holly Blossom are due to take part in a UK exclusive reality series titled “TNA British Boot Camp”, set to begin airing on January 1st, 2013 at 10pm on Challenge (UK).

A promo featuring the twin Knockout hopefuls has finally been released.

Meanwhile, it looks like the reality show may feature a romance between Hannah Blossom and co-star, Marty Scurll.

In an interview, he said: “Hannah Blossom took a bit of a liking to me, it’s natural she’s a lady, so she’s going to like someone like me.”

The fourth contestant on the series, Rockstar Spud rebutted: “You were walking round like a puppy dog, You were like this to Hannah, ‘Do you need your coat? Do you want someone to help you? Do you want me to get your bags for you?’ Is that what you call groundwork? While you were doing that I was concentrating on winning the show.”