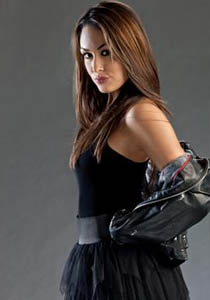 Former Divas Champion Brie Bella is the latest Diva to weigh in on today’s Diva drama.

Following sister Nikki‘s feisty retaliation to a WWE.com article posted earlier today, Brie took a softer approach, saying she knows how fans feel when it comes to the Divas division and even mentioned the names of several released Divas and Sara Del Rey.

Wow, I just woke up to the craziness! The words spoken by Katie are laughable, but I’m a women who will stand for what I believe in…so…

I know what I’ve given to the fans and that’s all what matters. WWE might think your a bunch of puppets that are persuaded by their words..

I know how you all feel :) good and bad, I love it! I mean if WWE cared about Divas why do we have such little time on tv?

Why were divas such as Mickey James, Melina and Gail Kim released. Why aren’t wrestlers like Sara Del Ray hired? All amazing!…….

Kelly Kelly and myself have worked to hard to have an unknown, untalented writer say the things she did. Katie (whoever) [author of the article] Suck it! Love Brie

Thoughts: I have to agree with Brie on tweets 2, 3 and 4. She definitely said what the fans are thinking and her knowledge of Del Rey gets a +1. However, the article in question didn’t necessarily give the author’s personal opinion, rather stated what fans were thinking. I think everyone needs to really read over that article again. The author doesn’t try to diss Kelly or Brie, or the success they’ve had, but does state that some of WWE’s ‘purist’ Diva fans took offense.