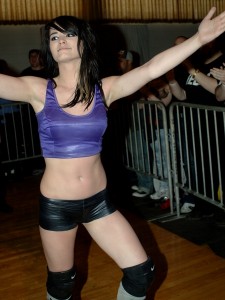 The Knight Dynasty will be back in full swing this October as Britani Knight joins the previously announced Saraya Knight for the SHIMMER tapings on October 1st and 2nd.

Britani and her mother Saraya were incredibly over with the Berwyn crowds as heels in their debuts last April.

[notice]SHIMMER – WOMEN ATHLETES is proud to announce the addition of BRITANI KNIGHT to its next set of DVD tapings, just 16 days away at the Berwyn Eagles Club!

Britani Knight and her mother Sweet Saraya made one of the most memorable first impressions out of anyone in SHIMMER history when they were introduced by former wrestler Rebecca Knox on Volume 37. The combination of Saraya’s pure evilness and the wacky antics of Britani and Rebecca resulted in The Knight Dynasty becoming one of the most talked about aspects of the Vols. 37-40 tapings, as well as one of the most vicious threats within the SHIMMER tag team division.

Many consider Britani to be a wrestling prodigy, having gotten her start at a very young age, and having come from a wrestling family. Unquestionably, Britani has a very bright future in the professional wrestling industry, and we are pleased to have her back in the SHIMMER ring once again on October 1st & 2nd! Don’t miss your chance to be there live.

SHIMMER returns to live action on Saturday & Sunday, October 1st & 2nd, 2011, at the Berwyn Eagles Club (6309 26th Street) in Berwyn, IL, just outside Chicago. Bell time on Saturday, October 1st is 2pm (doors at 1pm, SPARKLE pre-show matches at 1:30pm). Bell time on Sunday, October 2nd is 1pm (doors at noon, SPARKLE pre-show matches at 12:30pm). Volumes 41-44 of the SHIMMER DVD series will be filmed during the course of the weekend, with two full length DVD releases taped each day. The events are suitable for all ages.

Front row seating is already SOLD OUT for both days. General admission seating to the October 1st & 2nd tapings can be purchased at http://shimmerwrestling.blogspot.com/p/events.html using PayPal. General admission is $30 per full day of taping (essentially $15 per DVD worth of live matches). You can also purchase tickets by mail, using money order. For mail order instructions, E-mail [email protected]

Since seating at the Eagles Club is very limited, we do suggest securing your tickets in advance if you wish to attend. Less than 50 seats for each day remain available before we reach venue capacity.

After the shows both days, stomp on down to the Garv Inn Bar & Grill, located at 6546 W. Windsor Ave. in Berwyn, IL to party with the wrestlers and your fellow fans. It’s located less than a mile from the Berwyn Eagles Club, right by the train tracks.

In addition to the SHIMMER events that Saturday & Sunday, our friends at AAW will present a card at the Berwyn Eagles Club on that Friday evening, September 30th. A six woman tag team match featuring SHIMMER talent will be on the AAW event, as MsChif & Jessie McKay & Nevaeh will face Madison Eagles & Mena Libra & Sassy Stephie. Visit http://www.aawrestling.com/ to pick up tickets to the September 30th AAW event, to make it three straight days of live wrestling at the Eagles Club![/notice]