Cage Match on Impact This Week 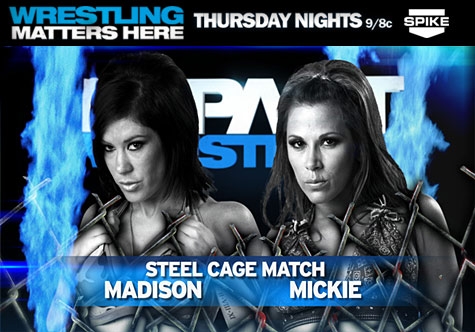 Though it initially seemed as though the Knockouts steel cage match filmed at last week’s set of tapings would air on last Thursday’s Impact Wrestling, the match was obviously not on the broadcast — that’s because it’s actually set to air on this week’s show.

The cage match, which pits Madison Rayne against Mickie James, will air on Thursday’s broadcast at 9pm on Spike TV.

Like the Gail vs Mickie main event a few weeks ago, the match is receiving a big promotional push and is even the subject of the following commercial.