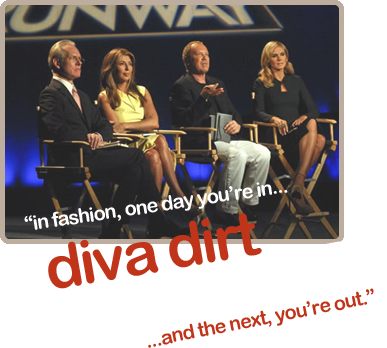 A few rules: We only judge outfits/ring attire that we haven’t judged before or we have already seen several times on TV before. If a Diva is seen in more than one outfit in any given week, we mark them as ‘#1’, ‘#2’ and so forth.

THE BELLA TWINS
Cryssi: I don’t even know what this outfit is. I guess it’s some magician’s assistant type of thing. Either way, it’s ugly. Good thing the Bellas have their fit bodies and good looks, because that’s the only thing that helps this thing. 2/10
Erin: Those dresses kind of look like re-purposed garbage bags. Not cute, to say the least. Not liking the pink on them, either. Maybe they should have stolen Scarlett Johansson’s wardrobe from “The Prestige” if they wanted to rock the sexy magician’s assistant look. 3/10
Melanie: I guess it was obvious they’d be dressed as magician’s assistants but lulz, they could have done a better job. This looks like the Pleasure Chest version of a magician’s outfit if you catch my drift. 2/10
Steven: Looks like someone took a pair of scissors to Trish Stratus‘ old black and pink gear. Definitely not the most practical outfit, but I think it serves it’s purpose here with the magic theme and all. 6/10

EVE TORRES
Cryssi: This is gorgeous and I absolutely love it. With Eve’s complexion, the shimmering green material absolutely pops. She looked beautiful on Raw this week. 9/10
Erin: I like the turquoise color, but not her tights’ design scheme. I just don’t like the design of them in general. As pretty as the color is, I’m just not feeling it as a whole. It doesn’t really look like “wrestling attire”, if you get what I mean. It sort of looks like a tank top and shorts modified to work in the ring, and I guess that’s probably the point. It looks awkward to wrestle in. 5/10
Melanie: I love the green and the detailing that’s gone into the top and shorts to make it a seemless outfit but at the same time, it has a Ninja Turtle feel to it lol. It’s certainly eye catching and for that reason, thumbs up. 7/10
Steven: Honestly, I wasn’t a fan of this gear when I saw it this Monday, but it’s been growing on me ever since. Green is still not my favorite color, but Eve is working it out here. 7/10

Read on for more of this week’s outfits and to see who’s been branded our winner and loser.

KATIE LEA
Cryssi: Katie has definitely had better outfits. The top of this one is very funky, but I like the pants a lot. She looks great in purple so she gets an extra point from me for that. I wish she’d ditch the white extension things in her hair though. 6/10
Erin: The layering on the top looks a little peculiar, and I’m not sure suede boots are the best ones to wrestle in. Still, it fits her gothic persona without looking too out of place or goofy. It’s not all that bad, but not all that great either. 6/10
Melanie: Pretty much all that we’ve come to expect from Katie. I like the purple. 5/10
Steven: l’ve always been a fan of Katie Lea’s eccentric sense of style. That said, her gear this week was a bit bland. Love the color on her however. 5/10

MARYSE
Cryssi: When it comes to fashion, Maryse doesn’t do a whole lot that’s wrong. Black seems to be one of her trademark colors and she always looks flawless. There’s nothing special about this attire, but with Maryse it doesn’t have to be special. She could make a potato sack look amazing. 8.5/10
Erin: This is about as plain as her ring attire gets. I like the simple black look, even if it kinda looks like she got attacked with a bedazzler. This is probably my favorite of her tight variations–it looks sexy, but not over the top, and I think that fits her persona the best. 8/10
Melanie: Ever since she started using material around her cleavage upon her return last November, her tops have looked pretty classy. It’s cute. 7/10
Steven: Nothing new with Maryse this week. She looks great as always, but I prefer most colorful outfits. Maybe if she’d added some colorful or metallic accents, this outfit could been more memorable. 6/10

SAVANNAH
Cryssi: I like this little dress. The color really greats on Savannah and shiney things always have appeal to me. It fits her beautifully and highlights what it needs to highlight without making her look slutty or trashy. It’s classical great. 8/10
Erin: Simple as can be, but brought to another level with a pretty bronze color. I love it. It’s tight and low cut, so it meets the “sexy” requirement, but still leaves enough to the imagination. It kind of reminds me of Lillian’s old sparkly ensembles, which isn’t a bad example to follow. 9/10
Melanie: Love it! Savannah looks glowing quite literally. The dress has some oomph to it and she needs little accessorizing. Great job. 8/10
Steven: I actually love this outfit! The color is great, the dress is sexy without being hoochie. I honestly don’t have anything bad to say. 10/10

TIFFANY #1
Cryssi: Tiffany is very pretty in purple and this simple little garment works for her. The look is plain but she jazzes it up with some blinging earring which keeps the whole look for being boring. Not groundbreaking, but Tiffany isn’t a flashy person. I like it. 6.75/10
Erin: Simple, and pretty ordinary. I like that the neckline doesn’t show us all she’s packing. The purple is alright, but not something I’d put all over a solid color dress. Maybe if it were in a deeper shade of purple, I’d like it better. 6/10
Melanie: I like the shade of purple and I think it fits nicely but it just lacks the spark that Savannah’s dress has. Also, the dangling earrings don’t look great. 6/10
Steven: Very simple look for Tiffany, borderline boring even. Maybe some more accessories, a necklace maybe, could’ve livened this up a bit. 5/10

TIFFANY #2
Cryssi: Tiffany isn’t the first diva to wrestle in a small skirt and she won’t be the last. I don’t have a problem with her wearing a skirt to wrestle in. I dislike the boots because I’ve never been a fan of white footwear and I hate the top. This outfit doesn’t work for me, but at least she’s wearing something to make herself stand out. 3/10
Erin: This looks like a rejected Dallas Cowboys cheerleader costume; the matching skirt and boots are probably to blame for that. At first glance it looked ultra trashy, but the more I look at it the cuter it gets. I mean, it fits for an unexperienced wrestler to wear it to the ring. She’s not supposed to be taken seriously in the ring yet, and this fits her persona at this stage. I was never a fan of girls wrestling in skirts, and I’m still not. But like I said, she’s not supposed to be taken seriously just yet. 6/10
Melanie: One of my biggest pet peeves is wrestling in skirts so imagine my horror when I saw Tiffany. I had really hoped that phase in wrestling was over. Tiffany’s skirt can hardly be called a skirt, it was barely there — at least Christy Hemme has the decency of using some more material. If Tiffany wants to be taken seriously, she needs to switch to some decent ring attire. 2/10
Steven: This outfit is screaming ‘Football Team Cheerleader’ to me, which isn’t necessarily a bad thing. I think the look goes well with her bubbly personality. It could use a few personal touches to make it more original, but not a bad look all in all. 7/10

So, how did the girls score? Let’s put our scores through our highly scientific “Ensemble Classification Calculationomagraphier”® and see who we’ve deemed this week’s winner and loser. The following is in ascending order by their calculated score:

LOSER: THE BELLA TWINS. Abracadabra your outfits out of our memories please.

WINNER: SAVANNAH. NXT’s ring announcer was the golden one this week. Congrats!

Vote for your favourite look from this week below:

Thoughts? Complaints? Conspiracy theories? As always, let us know in the comments!