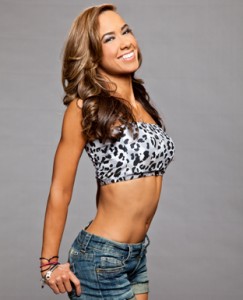 There’s breaking through, and then there’s smashing through at 100 miles per hour.

For AJ Lee, and befitting of her character, whose unpredictability means she can change demeanor at the drop of the hat, she certainly did the latter in 2012.

Never in the history of WWE has a Diva — especially one who has been told she’s too small, she’s not buxom enough, she would never make it in the WWE — made such an incredible impact in just one year. Sure, AJ’s been around for a couple of years now, but in 2012, as cliche as it may sound, she truly arrived.

No one could have prepared themselves for the rocket-ship that would be AJ’s ascension to not just the top of the Divas roster, but to the top of the WWE roster. Whether it was an axe to grind with her fellow Divas, or becoming entangled with some of the biggest names in WWE — John Cena, CM Punk and Kane, just to name a few — AJ has well and truly redefined what it means to have a breakthrough.

And thus, there really could be no other choice for this award.