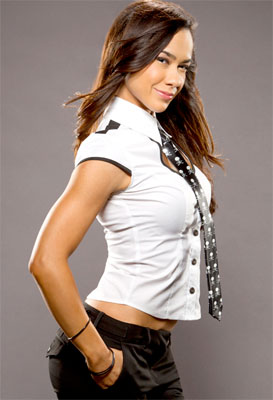 There is only one female wrestler on TV right now that gets a mega face reaction, so picking the winner of this category was a no-brainer.

AJ Lee has been on fire throughout 2012 and this year has been more than kind to the pint-sized WWE Diva. In 2011, AJ was used more in an ehancement role for the likes of the Divas of Doom and whilst things didn’t get any better at the start of the year (Big Show flattened her), things definitely picked up at WrestleMania 28.

At the Grandest Stage of Them All, AJ gave then boyfriend Daniel Bryan a quick kiss good luck at the start of his match against Sheamus. Unluckily for Daniel, he turned around into a Brogue Kick and lost the World Heavyweight Championship in 18 seconds. Who knew that the kiss would catapult AJ and D-Bry to mentally unstable stardom? After being blamed relentlessly by the world’s most famous vegan, the Chickbuster snapped and Cray-J was born!

AJ assaulted her way through the Divas division and snogged her way through the main event scene (she even joined Katie Vick, Tori and Lita by jumping on the big red bandwagon) and she was the catalyst for the triple threat WWE Title feud featuring Bryan, Kane and CM Punk – not bad going for a Diva in the modern era!

Following this, the Diva then went onto make up with Daniel Bryan, only to then leave him at the altar and become the General Manager of RAW. Just a normal day at the office, right? AJ then got her last name back and managed 92 days at the helm of WWE’s flagship show. Since her resignation, she’s been quarreling with Vickie Guerrero and playing tonsil tennis with John Cena and thus, here we are today.

AJ Lee has been rubbing shoulders with WWE’s biggest names and has been skipping her way through the year with charm. Her acting has been superb and even the likes of Anne Hathaway would be jealous of her facial expressions. Whilst the Divas Championship has so far eluded her, the fans’ respect and admiration certainly hasn’t.

She may play crazy, but there’s something incredibly endearing about AJ that draws fans in and has made her the most cheered-for Diva in recent history.