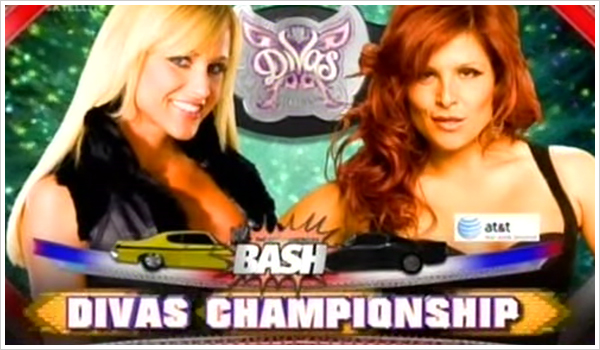 The Great American Bash is just a couple of hours away! The first ever Divas Champion will be crowned when Michelle McCool and Natalya face off. As Diva Dirt winds down it’s Bash-themed weekend, it’s time for our bloggers to decide just what will happen and who will win in our tip sheet!

Doug: I think Michelle will snag the title tonight. It just seems like WWE wants to build the title on SmackDown’s top face at the moment. She’s definitely earned it, with her winning streak lately, so I don’t see why she wouldn’t win. Natalya is new, but I don’t see her getting the title so soon. I think Natalya will battle Michelle for the title once Michelle is champion.

Erin: I stated my case pretty thouroughly in the Diva Debates, but I’ll try and mix it up a little bit here. Obviously, I think Natalya will win. She’s been pushed as this forced to be reckoned with, and while Michelle is obviously SmackDown’s golden girl, it makes much more sense to gradually build up to Michelle’s win at a later date and have Natalya walk out as the first Divas Champion at the Bash. If Natalya holds the title for a bit, she can dominate for a while, showing her strength and building up the prestige of the title. Then, it can be Michelle’s turn for glory.

But for now, I see Natalya slightly dominating the match at the Bash, toying with Michelle and eventually winning after Michelle puts up a noble fight. Then, Michelle can gain fan sympathy and build up to an eventual title win. So it’s definitely Natalya for the win, IMO. She deserves a good title reign, since she’s one of the most polished wrestlers of all the WWE’s Divas, and it would make sense to showcase her as one of the faces of SmackDown. Bottom line, Natalya is going the be the first Divas Champ – bank on it. ;)

Melanie: First of all, I would like to begin this blog my sharing my sentiments from my PWInsider column, both of these Divas have worked so hard and whoever wins tonight they will have truly deserved it. It could honestly go either way and I wouldn’t complain (too much) if Michelle won or if Natalya won, WWE is truly in a position that this could go either way. That said, my money is on Natalya picking up the win tonight and becoming the first ever Divas Champion. The reason i go for Natalya is because of the many reasons Erin stated above (we’re like peas in a pod, even sharing the same opinions!) but also because I think WWE’s mentality really could be executed here and that mentality is: there’s money in the chase.

Like Jacqueline winning the Women’s Championship in 1998 despite Sable being hot with the crowd, WWE felt there was money in the chase and that Sable’s eventual win at Survivor Series would be a huge moment and it was. That same strategy should be employed tonight at the Bash, with the hot favourite – Michelle McCool chasing Natalya for the title, possibly wrestling another couple of times before really fighting a hard fought match and winning the title. I think that would be even more rewarding for Michelle and it would really heat up this feud and make major bank. I would have Natalya go over here, then win a rematch at SummerSlam (or in the main event of a SmackDown) and then Michelle really put her all into going for the gold and winning the title in September or October. Natalya for the win, even if she does cheat. Nonetheless, I expect a very good match, I would love to see both of the Divas try to go for their submission holds and try to play off that.