Diva Dirt’s Stars of the Week: Week of November 29th 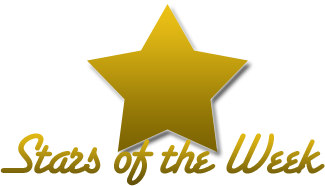 Cryssi: I think it’s only fitting that my first ever Diva Dirt Star of the Week goes to one of the girls I showcased for 13 straight weeks. I can make a case for all the NXT rookies and why they each deserve this honor, but for this week I’m going to select the one who personally impressed me the most. It doesn’t take a rocket scientist to figure out that Kaitlyn is as green as Earth Day when it comes to wrestling. Her experience is severely lacking, but that said she came out to the ring each and every week and made the most of what got thrown at her. She was given a storyline in which she flourished. Her chemistry with Dolph Ziggler was hot and her feud with Vickie was fun to watch. She even had a great match throughout all of this and that was when she was in the ring the first time against Naomi. Kaitlyn got the WWE to rally behind her and more importantly the fans rallied behind her as well. On Tuesday night she was crowned the winner of season three of NXT and I’m truly excited for her. Her week kept on getting better when she personally announced it to Vickie and Dolph that she was the newest SmackDown Diva. Vickie was horrified. Dolph on the other hand… well lets just say that the sparks are so there. Kaitlyn is my Diva Dirt Star of the Week. I can’t wait to see her on SmackDown next week.

David: My Star of the Week is Kaitlyn. It can be argued that she didn’t deserve to be the winner of NXT season three and that she isn’t very good in the ring, but regardless she took full advantage of her opportunity to be on the show. During her matches she seemed very green at times, but her storyline with Vickie Guerrero was amusing and she obviously connected well enough with the fans because they voted her as the WWE’s next breakout star. I’m not sure how the WWE will utilize her in the future, but for now I congratulate her for winning NXT and a job well done!

Eric: My Star of the Week is for a Knockout I feel has had the best run of her TNA career, but has received little to no press, save this site. Sarita has shown that one doesn’t have to have the name of a VicTara or Mickie James to make an Impact. While the majority of internet wrestling journalists are stuck on the aforementioned feud, Sarita has been racking up win after win, and has shown herself the most deserving Knockout to be the next champion.

Melanie:My Star of the Week pick is the woman who I felt should’ve won NXT: Naomi. While she was pipped to the post by Kaitlyn (I’m getting over it, I promise!), Naomi stayed true to herself for the entire 13 weeks of competition. She may have come into WWE as a dancer with no previous experience in pro wrestling/sports entertainment, but she showed on NXT that she has respect for the industry. While the show became like a traveling circus under the guise of ‘entertainment’ due to some of the people involved (*coughMICHAELCOLEcough*), Naomi constantly rose above the ridicule of NXT 3 and showed integrity, saying that she was here to wrestle & didn’t compromise herself for the sake of entertainment. She has a long way to go still, but she’s obviously passionate about her craft & wants to be taken seriously as an athlete and wrestler. I respect her for staying true to herself and not evolving into an over-the-top character just for votes. I hope she has a bright future in WWE.

Steven: Love her or hate her, you can’t deny that NXT’s Kaitlyn has had a whirlwind week. Coming into NXT as the ultimate underdog, she replaced Isis the Amazon as Vickie Guerrero’s rookie and took the show by storm. Her sense of humor and quirky personality helped her make her way into the hearts of the audience and garnered her enough votes to take home the NXT 3 crown. Although her win has been very polarizing amongst WWE fans , it’s safe to say Kaitlyn has the best week ever.