Diva Dirt presents its annual selection of women who have been most newsworthy and talked about in 2012. The 12 women selected have embodied the zeitgeist of the year by hitting the headlines, breaking boundaries, stopping the show, and becoming trending topics. The Diva Dirt editors and contributors have picked one woman as the Diva Dirt Woman of the Year, as well as 11 runners-up who have helped define 2012. Join us as we count down our runners-up before unveiling the Woman of the Year on December 31st.

LITA
The Blast from the Past 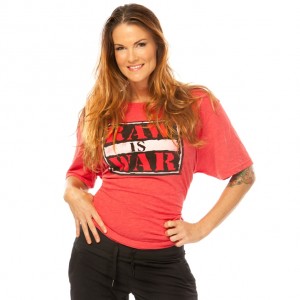 She may not make as many post-retirement appearances as other WWE fan favorites, but when she does show up on WWE television, Lita makes an impact. For proof, look no further than when the four-time Women’s Champion made a surprise appearance in July at the 1000th episode of Raw, answering an open challenge by Heath Slater to any of the “WWE legends”. The legendary Diva agreed to go toe-to-toe with the “One-Man Band” in a no-DQ match, but also informed him that she had hired some protection for the night: the APA.

When Slater tried to head for the hills, a slew of WWE legends dragged him back to the ring, right into a Twist of Fate by Lita. After a Clothesline From Hell by JBL, she topped off the match with a Litasault and pinned Slater for the win. She celebrated the victory with a big group of legendary WWE names, standing shoulder to shoulder with them and looking every bit a defining figure in the WWE’s history.

Lita’s legacy is often remarked upon, and several women wrestlers active in the business today name her as their inspiration. One of those women is AJ Lee, who had a breakout year with the WWE in 2012, taking part in dramatic, high-profile storylines that included an in-ring wedding, much like Lita herself. It has become clear that Lita’s unique presence and style helped birth a new generation of women’s wrestlers, and we’re only beginning to see the fruits of that.

Further proof of Lita’s significance could be found in the fact that she became the first Diva to appear twice in the same video game. “WWE ’13”, which hit stores in the fall of 2012, featured two playable Lita characters: one of Lita in her modern day attire and another sporting her Attitude era look. One could joke that this means Lita is twice the Diva of any other, but we won’t go there; Lita inspires some of the most heated and passionate discussions from women’s wrestling fans, and we should know! Many of our posts at Diva Dirt prompt fiery discussions, and often Lita, though six years retired, figures into the argument one way or another. That’s staying power.

In the years following her retirement, Lita made a few WWE appearances, but on the whole stayed on the sidelines. By comparison, 2012 was a reemergence for her, as she appeared at WWE’s Fan Axxess event, attended the Hall of Fame ceremony, did press for WWE ’13, interviewed for Edge’s DVD (her first interview on a WWE DVD since her retirement) and, as mentioned in the beginning of this article, made a surprise appearance on Raw’s 1000th episode. 2012 could very well be considered the year that Lita returned to the WWE fold.

Accolades also came Lita’s way this year. Her Litasault was the only Diva finisher to be featured on WWE’s “50 Greatest Finishing Moves” DVD, which hit stores in August, and her main event Women’s Title match with Trish Stratus landed at #16 on WWE’s list of the 50 greatest matches to take place on Monday Night Raw.

Last, but certainly not least, this year Lita was bestowed with the honor of being named Diva Dirt’s “Greatest Raw Diva Ever”. Coinciding with Raw’s 1000th episode, Diva Dirt’s weeks-long tournament allowed fans to vote for their favorite Diva in Raw’s storied history, and (as would be expected), the finals came down to Lita and her longtime “frenemy” Trish Stratus. In the end, Lita garnered 59% of the vote and emerged from the tournament the victor.

Any one of these moments on their own may not be enough to land a Diva on our “Women of the Year” list, but when we look back at the whole of Lita’s 2012, it’s tough for us to see how she, as a retired Diva, could have had a more eventful and notable year with the WWE.

Check back tomorrow for another Women of the Year post.