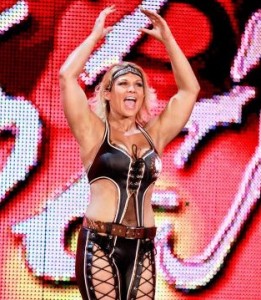 As had been widely speculated, Beth was due to finish up with WWE at the end of October. This was proven right when she was ‘fired’ on Raw last night as a way to write her off television.

Many Divas, including Beth’s best friend, Natalya, have weighed in on the decorated champion’s legacy in WWE.

Natalya wrote: “Thank you @TheBethPhoenix for always being there for me. Tough times don’t last. Tough people do.”

Meanwhile, Divas Champion Eve Torres, who celebrated the five year anniversary of her Diva Search win yesterday (October 29) — the same day as Beth’s final night — wrote: “Today we lost one of the best, but her hard work will live on through everyone she touched! #ThankYouBethPhoenix.”

NXT winner Kaitlyn tweeted: “@TheBethPhoenix To know you, learn from you and work beside you was a true privilege. #ThanksForTheBeatings.”

Finally, Tamina Snuka, who faced Beth at Elimination Chamber in February, added: “#ThankYouBeth For My Very First one on one PPV match. Despite our differences You Are such a true woman and You will be missed.”

What are your favorite Beth moments? Tweet us at @divadirt with the hashtag #BestBethMoments.