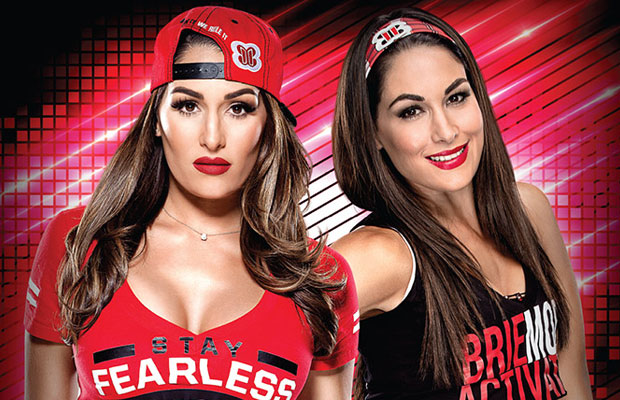 The much anticipated Total Divas spin-off series starring the Bella Twins finally has a premiere date.

Nikki, Brie and co. will take to our screens in their very own reality show on Wednesday October 5th, 2016 at 8pm ET/PT.

Each hour long episode of the six episode series will air every Wednesday until the season finale on November 9th, 2016.

E! had this to say about the series:

“Although these twins share the same genes, they will never share the same jeans as living together was more tolerable when they just shared a womb. The free-spirited, vegan-loving, live-and-let-live lifestyle of Brie and Bryan has always clashed with the fancy panache of the designer handbag-loving Nikki and the meticulously organized tendencies of John. However, when the four world-renowned WWE Superstars move in under one roof, the comical clash of titans rings all throughout the suburbs of Tampa, FL.

The series kicks-off with Nikki and John being sidelined by injuries and Daniel’s recent retirement from the ring. This docu-series will follow the odd-couple relationships of these eccentric WWE Superstars as Brie does her best to nurse, not only Nikki, but John and Daniel back to health, all while trying to retain their sanity. With Nikki’s recent neck surgery, Brie’s retirement at WrestleMania®, Daniel’s untimely retirement from WWE, and John’s rising profile in Hollywood, fans will get an exclusive beyond-the-ropes glimpse into how these dynamic individuals juggle their reality and prepare for their uncertain futures.”

Will you be tuning in to Total Bellas? What are you expecting to see? Let us know your views in the comments below!