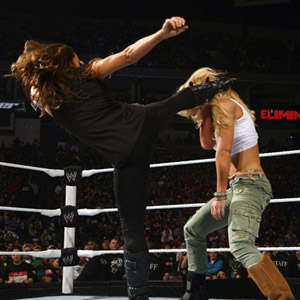 Despite having no advertised Divas match, WWE certainly delivered an explosive night for Diva fans at Elimination Chamber tonight. After Vickie Guerrero entered the ring pleading with Teddy Long to rehire her boyfriend Dolph Ziggler, Teddy instead rehired Kelly Kelly who had been fired by Vickie a couple of weeks ago on SmackDown.

Getting a measure of retribution, K2 attacked the now former SmackDown consultant but was soon fended off by Lay-Cool with Michelle hitting her vicious running knee on a defenseless Kelly.

But wait! It wasn’t over yet… Soon Trish Stratus, fresh from her appearance earlier in the evening, hit the ring coming to Kelly’s aid and took out both members of Lay-Cool. The seven-time Women’s Champion busted out some old favorites including the Chick Kick on Michelle McCool and the Stratusphere on Layla from the corner. She ended with a double Stratusfaction on both of the ‘flawless’ Divas.

Stratusfaction was certainly in the air tonight!

EDIT: Oops! We mistakenly reported that Vickie Guerrero was fired by Teddy Long at the pay per view last night. That didn’t happen. I got confused in the heat of the moment. After rehiring Kelly Kelly, Teddy Long said: “I gave this person free rein to personally thank you for all your time as acting general manager.” That would indicate that Vickie has simply been replaced by Teddy as the GM of SmackDown upon his return, while she continues to serve as official consultant.