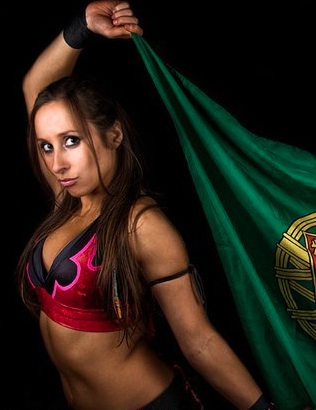 ‘The Female Fight Machine’ Jenny Sjodin retained the Pro-Wrestling:EVE Championship last night after a breathtaking and show-stealing Triple Threat match over ‘Portugal’s Perfect Athlete’ Shanna and ‘The Lancashire Terrier’ April Davids, but perhaps the reigning champion was a little too eager to make a statement ahead of her big Championship defence against Germany’s Alpha Female at ‘No Man’s Land’ on February 18 exclusively LIVE on iPPV at Diva-Dirt.com…

After 10 minutes of frantic non-stop innovative action Sweden’s Jenny Sjodin forced Shanna to tap out to a fujiwara arm-bar and, unfortunately, in the process hyper-extended the elbow of ‘Portugal’s Perfect Athlete’ in addition to dislocating her shoulder.

Due to being diagnosed and treated in a Lancashire hospital last night, Shanna unfortunately missed her flight back to Portugal at 5.30 this morning, in order to begin a full recovery plan and complete diagnosis and treatment Shanna needs to be back home in Portugal so we’re currently unable to announce what kind of effect this will have on “Portugal’s Perfect Athelete” long term or how long she will be out for. Rest assured as soon as we further news we will update everyone.

After such a stunning performance Jenny Sjodin’s Win Loss Record now moves to 11 wins, 4 losses and 1 draw with Sjodin’s only direct losses where she was involved in the decision having taken place on May 8 2010 (to April Davids) and April 8 2011 (to Britani Knight) with both of those avenged 2-1. All eyes are now on Sjodin’s next championship defence against Alpha Female (10 Wins, 1 Loss) at No Man’s Land, iPPV on www.Diva-Dirt.com/EVElive

As much as Alpha Female does indeed tick the boxes of all the nicknames and adjectives given to her, she is very much the professional predator, power-house and wrecking machine, Sjodin last night displayed the killer instinct required to win such a fight and perhaps now shows just how much of an even fight this is as ‘The Shooter’ battles ‘The Monster’.

Pro-Wrestling:EVE presents No Man’s Land: Sjodin vs Alpha on Saturday 18 February EXCLUSIVELY LIVE on iPPV on www.Diva-Dirt.com/EVElive and is available to order NOW! [/notice]