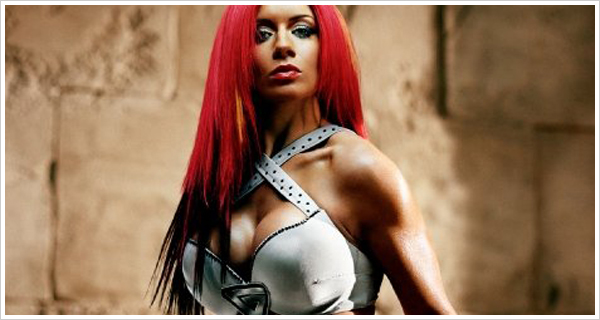 Meet Jemma Palmer, the female wrestler who has become a household name in the UK as Inferno from the hit Sky One reboot of “Gladiators.” Diva Dirt first introduced you to Jemma in April when we reported that she had been unveiled as one of the new breed of Gladiators – Jemma is an accomplished wrestler, with a purple belt in submission wrestling and even received a tryout from WWE in November 2005. Just a couple of weeks ago, we posted this scorching photoshoot of Inferno from Loaded Magazine. Well now we bring to you the woman herself! Diva Dirt had the opportunity to dish some dirt with Jemma last week on her pro wrestling career and WWE dreams:

Now us Brits know you as Inferno from Gladiators, but you are in fact a trained wrestler. How did you get into wrestling and can you give us some insight into your wrestling career?
I was always into wrestling as a child and grew up watching HHH, Chyna and Shawn Michaels. I did submission wrestling as this was about the closest thing I could do to pro wrestling as well as trampolining for the arial moves, as there wasnâ€™t anywhere else to train. I then was asked to do some modelling work at a local wrestling show and after that did valleting for FWA and Doug Williams, who was on TNA the other day, before getting a scholarship in the USA where I am still in training.

Here at Diva Dirt, we reported that you had a tryout with WWE in 2005 in Manchester. How was the experience?
The experience was great, I got to meet Kurt Angle, Shelton Benjamin, Ricky Steamboat and Finlay. At the time I didnâ€™t have any pro wrestling training under my belt, I got to show them I was willing to take bumps and had a passion for the business and they said liked my look and promo skills too. Overall it was very positive and encouraged me to get into the industry.

Unfortunately, you weren’t hired by WWE, can you tell us a little about that process? Did you feel at all discouraged?
I wasnâ€™t discouraged at all, it was great just to get looked at, considering my level of experience at the time. Kurt Angle commented that he could see I had an amateur background but encouraged me to do the pro training. And I also got invited to do the WWE Diva Search, so went to the USA for meetings about this which again was another encouragement as well as being in WWE Magazine as a superfan.

It was from those tryouts that WWE hired current WWE Diva, Katie Lea, did you meet her and if so, what was she like?
It was good to meet another girl who was into wrestling as much as me, she had about 5 years experience on me so its good to watch her wrestle, I like watching other women wrestle especially they bring it just as much as the guys do and it inspires me to train harder and push myself with moves more. It would be great to work with her in the ring someday.

Of course, you are now a household name through Gladiators. Have you put your wrestling career on hold for the show?
During the filming, which was intense doing long days and physical activity all day long, I had to stop all other activity even weight lifting in-case I got an injury. Now filming is over for a while Iâ€™m back to training but still have to watch what moves I attempt as I donâ€™t want to break anything so am extra careful and Iâ€™m still in touch with WWE to keep them updated on my progress. Overall the whole Gladiators series was filmed over about 4 weeks, so I didnâ€™t miss too much wrestling, plus on some events you still get to do takedowns.

Do you have a preference, Gladiator or wrestler?
They are both very similar really, you are playing out a role and using your athleticism and strength. I absolutely love doing both, to me its like comparing cake to curry â€“ I like them both very much!

Gladiators has been a huge success, but would you jump at the opportunity to join WWE or TNA if the opportunity presented itself?
Of course I would itâ€™s what I have trained for, getting full a developmental deal would be amazing, but being a Gladiator and part of the G team is also a dream job.

Do you currently watch WWE or TNA and if so, who are your favourite Divas and Knockouts past or present?
I watch Raw, Smackdown, ECW, Impact and also have WWE 24/7. Its great to watch for learning in ring psychology and putting matches together but mostly I watch because I am a fan. My favourite past Divas would be Trish for all she achieved and Lita for her style of wrestling. Currently my favourites would be Gail Kim and Melina.

Is there any Diva or Knockout you would love to have the opportunity to wrestle?
Iâ€™d like to wrestle Melina just because I admire her style of wrestling which is quite aggressive at times and also Mickie James.

Who are your female (or male) inspirations in the industry? Anyone you look up to or aspire to have a career like?
I have so many inspirations in the industry that have achieved so much; the list could go on forever to name a few: Triple H, Undertaker, Shawn Micheals, Big Show/The Giant, Rick Rude, Ric Flair, Hulk Hogan, Mick Foley and Jeff Hardy. I love seeing Vince in the ring too as well as Shane with his coast to coast trash can drop kick!

Finally, we’re definitely rooting for you! Thank you for the opportunity! Do you have any last words for your new fans at Diva Dirt?
Well Iâ€™m working hard to become the best athlete and wrestler that I can so fingers crossed it all works out and one day youâ€™ll see me on TV showing you some sick moves and being the best Diva that I can, I hope you enjoy watching me on Gladiators and Iâ€™ll keep you updated with any new developments. Thanks x

There you have it! Girlfriend certainly knows her stuff, right? I’m definitely rooting for Jemma, I think we have a possible Diva in the making! British readers, Jemma can be seen on Gladiators, every Sunday at 6pm on Sky One.

Jemma also attached a selection of pictures, which you can see below! Included is the aforementioned scan of WWE Magazine in which Jemma posed as a superfan!