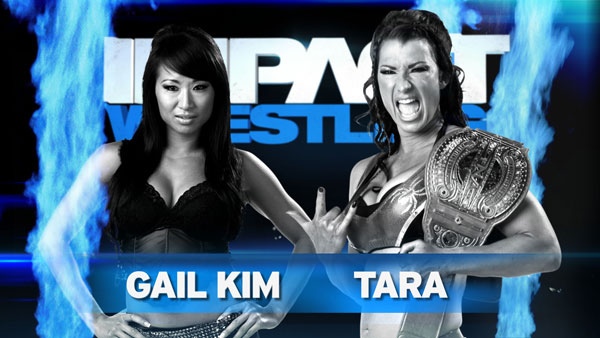 Earlier this week, we caught up with Gail Kim to talk about her return to TNA and much more. One of the topics touched upon in the audio interview was her return match on Impact Wrestling which airs tonight.

Gail is set to have her first match in a few months against a fellow former Knockouts and WWE Women’s Champion, Tara.

The last time Gail and Tara (then Victoria) faced off was in 2004 while in WWE.

Previewing the match, Gail told us: “It’ll be, like, a good start. I hadn’t wrestled for a couple of months at that point, so I was worried about being a little bit rusty.”

“Working with Victoria [Tara], it felt like no time had passed. I hadn’t wrestled her in who knows how long. It felt good, it felt physical, it reinvigorated my passion [for wrestling] that is already starting to come back again in full force.”

She added: “I think it’ll just be a small taste of what’s to come. We’re just going to get better and better.”

Thoughts: I can’t wait to see this match! If memory serves me well, I recall Gail & Tara having some great chemistry back in 2004 in WWE, so this should be one to look forward to.