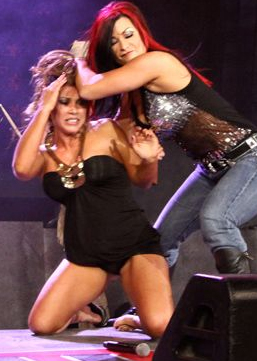 Two years ago, they wowed fans and critics alike inside a steel cage in the main event of Impact Wrestling, and tonight — almost two years to the date of that huge match-up — Mickie James and Tara are looking to make history again.

Both women are veterans of the ring, and between them have 15 major championships in WWE and TNA, so the bar is high for tonight’s match, especially with their 2010 feud still fresh in our memories.

Mickie tells Diva Dirt exclusively: “Being able to work with Tara coming in [when she debuted in 2010] was familiar in a sense. I knew her style. I knew she was going to bring it and wasn’t afraid of me bringing it. We could go out there and fight like the boys, and it’d be totally okay.

“I think now, coming full circle two years later, without the cage but insert a boyfriend [Tara’s Hollywood boyfriend, Jesse], it should definitely be interesting. It’s exciting. It is ironic though, it’s been two years on the money and here we are again.”

So what can we expect at Final Resolution tonight, two years on?

Hardcore Country says: “There’s a new spice to the mix this time with the whole Jesse, Hollywood boyfriend deal, which is something different we’ve never done together. That definitely adds a different spice to the mix.

“We’re going to do some different stuff. That’s the one thing, to keep it fresh. Do some different stuff, push each other to the limit and raise the bar. That’s what the key is for matches like that, especially when you know you have history. If you can just up your game and make it better than the last then that’s all the more better.”

The former Knockouts Champion went on to praise her opponent tonight, arguably one of her toughest in-ring challengers.

“Tara is incredible. There’s probably a handful of women I could say I just love stepping in the ring with them at any given time because I just know they’re going to push me to my limit, and she’s definitely one of them. We have had some incredible matches. Probably the best one, the most memorable match was that cage match that we had. She’s a tough woman, and she’s incredible.”