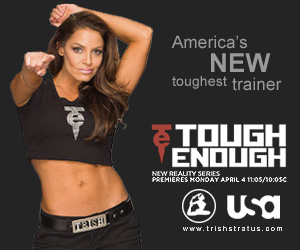 It’s been a busy couple of months for the legendary 7-time Women’s Champ, Trish Stratus. She’s back in the WWE fold with the USA Network revival of Tough Enough, she’s going to WrestleMania this Sunday, has a movie premiering in one week and is on the cover of Oxygen magazine! With so much going on in the Stratusphere, we decided to give the Diva Dirt Legacy Award winner a call and discuss!

In this exclusive interview, a sequel to our first interview last September, Trish dishes on her return to WWE, working with Snooki and this Sunday’s WrestleMania 27 extravaganza in Atlanta. In this one hour+ interview, we also speak in depth about the upcoming season of Tough Enough, which premieres next week, as Trish gives us her opinion on each of the five female contestants. We also touch upon her stunning Oxygen magazine cover, the world premiere of her debut movie ‘Bail Enforcers’, and the WWE release of Dave ‘Fit’ Finlay who had a big hand in Trish’s training and success in the ring as a WWE Diva.

Please Note: This audio is the exclusive content of Diva Dirt (diva-dirt.com), for which we hold copyright. By downloading our audio you agree not to repost the content elsewhere including but not limited to other websites, blogs or message boards. Failure to respect copyright may result in legal action.

WWE Tough Enough premieres next Monday, April 4th, at 11pm ET right after Monday Night Raw. Then from April 11th, it moves into a pre-Raw slot of 8pm ET.

The latest issue of Oxygen featuring Trish on the cover is on newsstands now and also available at TrishStratus.com.