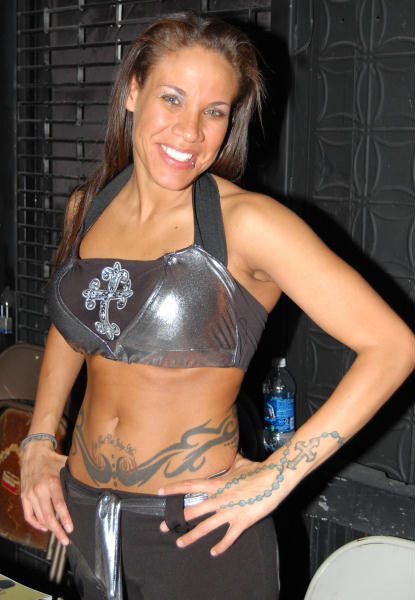 Separating your personal life from your wrestling life is difficult, but it’s a delicate balance that WSU World Champion Mercedes Martinez has managed to attain. A private person outside of the ring (she has no Twitter page, nor a public Facebook page), Mercedes has been coy about responding to any of the “life imitates art” drama between herself and Jessicka Havok in WSU.

For those new to the story, it all started with a tweet — or three — when Havok’s teammate and friend Allysin Kay vented on the social networking site, alluding to issues between the WSU headliners.

In an interview with Diva Dirt, Jessicka Havok elaborated on the tweets and her issues with Martinez, who she will face in a “Title vs Title” match on March 3rd at WSU’s 5th Anniversary Show on Internet pay per view. Havok says that some of the backstage tension has arisen over Martinez’s injury last November (she suffered a concussion after taking a Russian leg-sweep off the top rope), as well as what Havok believes to be Martinez’s real life feelings on the rising star coming across in video promos in which the champion questions Havok’s merits as a technical wrestler.

Initially, Mercedes was reluctant to respond. As mentioned, she’s a private person. However, the WSU World Champion has broken her silence exclusively to Diva Dirt (full interview airing tonight at 8pm ET). A taste of what’s to come below:

“First and foremost, I just want to reiterate that I am a very private person,” preludes the conversation before diving deeper. “I tend to keep to my private life and my personal life away from wrestling due to the fact that I’ve had some issues in the past with stalkers and security beaches.”

Regarding Allysin Kay’s tweets, Mercedes says that issues should’ve been brought to her directly.

“Allysin Kay bringing up personal stuff – it bothers me to a certain extent. The way I see things is that, if you have a problem with me, come and talk to me. I’m one of those people who, if I have a problem with you, I have no problem coming up to you, calling you or emailing you and saying, ‘Hey, I’m coming up to your face to tell you how it is’.”

“I’m so open-minded. I’m so blunt about things. You don’t like what I have to say? Come and talk to me about it. Be woman enough to not hide behind a computer and just hit me up.”

Regarding one of Kay’s tweets — “It’s funny to see so-called vets legitimately threatened by rising talent, & I’m not talking about myself. Be mad at yourself & no one else.” — the World Champ says she has “no idea” where Kay is getting her information from.

“For her to say, ‘Veterans out there…’, no. Maybe there are some veterans out there who won’t help the younger generation, but that’s not me. Where she’s getting her information from — she better check herself.”

“If you’re defending your friend Havok, that is fine, but do not put my name in the middle of things if you cannot be woman enough to talk to me about it,” Martinez adds.

“If I had a problem with Havok, she knows about it. We talk about it. If I have a problem with the way she handles herself, hey, I’m here to help you. If you don’t like the way I’m coming across, tell me about it. That’s how I am.”

“If she had an issue, she should have been woman enough to say, ‘Hey Mercedes, this is what I’m hearing. Is this true?’ You know what, rat somebody out. I don’t care. You can’t drag my name through the mud if you don’t have the full details. Where they’re getting their information from… obviously someone wants to stir up some trouble.”

As for why she’s decided to speak out, Martinez says: “”Yeah, there’s an issue between me and her. It’s out there, and it’s a little personal, yes. I’m not going to elaborate too much about it because it’s our business, but if she wants to go out there and yap her mouth, I’m going to try and clear my name. Yeah, I’m going to try and defend myself because as a woman and a wrestler, I have every right to do that. Now you’re playing not just with my name, but you’re playing with my career which I’ve literally gone through blood, sweat, tears and injuries to make this career of mine.”

One of the points of contention in all of this friction, which Jessicka cited to Diva Dirt as where the heat between the two stems from, is Martinez’s concussion injury last November at the Breaking Barriers II Internet pay per view.

Mercedes says injuries happen, and she doesn’t feel animosity because of that, but because of what happened after.

“I do blame her for part of it, and she understands. I hope she understands and if she doesn’t, I’ll clear it up [with her]. Injuries happen. I’ve had many injuries. When it comes to this injury, it happened, I was down for the count, but she persisted on still — even though I am injured — hitting me with her finisher.”

Mercedes elaborates further: “She said it in interviews — I know for a fact, I’m not stupid — [she said] that she didn’t care. That’s where you cross the line with wrestling etiquette. When someone is injured, storyline or not, you do not put them at risk any more and that is what happened. I suffered a stinger at first, she picked me up and hit me with her finisher… I was done.”

Following the injury, the match progressed and the pay per view ended in a controversial angle that saw Havok threaten Mercedes’ life with a machete. Martinez says the match should’ve wrapped up after she got injured. “Regardless of whether you want to make a statement or not, you just stop. That is what I learned from my veterans.”

“So yeah, I’m going to put some of the blame on her. Yes, it was in a cage [and] injuries happen, but the fact is, the injury happened and she still persisted on furthering the injury. That’s [what] I have the personal issue with.”

Even in spite of the issues, Martinez, like Havok, has respect for her opponent. “I’m not going to sit here and hate the girl for it. I respect her. I respect her getting in the ring with me. I respect her for all she’s accomplished so far in WSU. Yeah, we have a little issue but that’s our issue.”

Mercedes Martinez goes into much more depth on this story in an exclusive interview airing tonight on Diva Dirt Live. Plus, Mercedes talks about being WSU World Champion for three years, an update on her concussion injury and more.