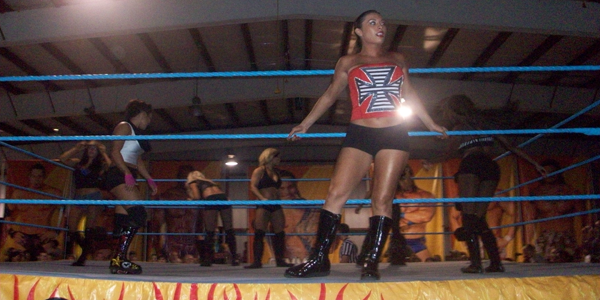 Saturday night, I attended another FCW Show, and as always, it was a great time. Before the show, I got to meet Kaitlyn and just as I was literally stepping out the door to leave, I spotted Maxine and also got to meet her. Both of them were great to talk to and it was awesome to get to see them as I normally dont get to meet people who are wrestling that night.

This was definitely the best of my trips, and the Divas match was a large battle royal involving Audrey Marie, Caylee Turner (Christina Crawford), Sonia, Maxine, Kaitlyn, Raquel Diaz, Divas Champion, Aksana, and the debuting, Ariane, of Tough Enough fame. Now before I get into the match, bear with me that it’s pretty hard to remember most of the eliminations since I was trying to get some non-blurry pics, so I’m just going to summarize the match with some notes instead.

* Ariane (which she was announced as) was the first eliminated but tangled with Caylee Turner for a few I believe.

* Somewhere in the middle of this, Audrey Marie, Caylee Turner, and Maxine (I believe in that order, but not definitely sure) were all tossed over because the next thing I knew we were down to 4. (It’s pretty hard to pay attention to eliminations when trying to focus on everything without a camera crew to film it).

* The final four were Aksana, Kaitlyn, Raquel, and Sonia, with Sonia eliminating Aksana next.

* Kaitlyn was then double teamed by Raquel and Sonia, as they lifted her over the top rope but she was able to hang on until being knocked off by both of them (pretty sick).

* Sonia and Raquel battled for a little bit trying to eliminate each other with clotheslines over the top rope, but Sonia was able to dropkick Raquel out of the ring and surprisingly win.

It seems they might be pushing Sonia as Aksana’s next challenger based on tonight, as well as the ‘Diva of the Month’ video on their site. All in all, the match was fun, but hard to keep up with so much going on. I liked Sonia winning as I was expecting Aksana to so it’s cool to have a surprise. Check out some pics below!

Check out some pictures of the show below. Yes, that is Ariane in the furry boots!