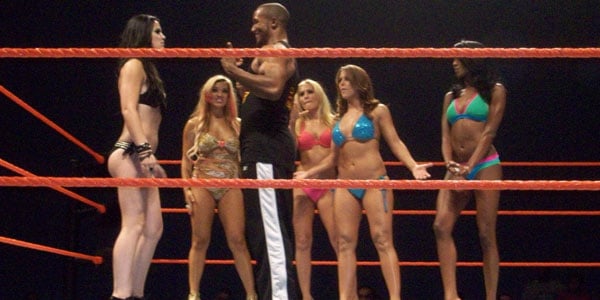 Greetings everybody, and welcome to one of those rare non-TV recap posts I pop up with every now and again. If you somehow didn’t see the topic title or the big photo right above this, allow me to inform you of the purpose of this post. Friday night I attended my first FCW show since January, also known as the first stop in the second annual Summer Slamarama tour. It’s only fitting that last year, I think my first post ever on this website was recapping a bikini contest at one of the shows… because that’s exactly what I’m here to do again!

Say what you will about the contests, but this was actually a lot of fun and entertaining. As usual, I’ll provide a few bullet points of the bits I remember from the show so enjoy my foggy memory at its finest!

* Before the actual show started, they had a meet and greet set up featuring all six of the Divas competing in the contest later (Paige, Raquel Diaz, Sofia Cortez, Caylee Turner, Summer Rae, and Audrey Marie). They were signing huge posters of themselves for free, and I think all except Audrey’s were pics I’ve never seen before. All six were very friendly and it was great to get to meet them. The Divas really are some of the most nicest people you get to meet and it was a blast to get to do so.

* They had a “Dancing with the Superstars” contest to start the show off, which featured a crowd member boogieing (yes I just said boogieing) with a Superstar and the winner receiving free tickets to the next show in July. CJ Parker (who ultimately won) breakdanced with a child, Brad Maddox & Byron Saxton did ballet with a female, Sonny Elliot and his orange pants got down with another woman, and our very own Caylee Turner busted out her finest robot and “white girl dances” I’ve ever seen. Amazing all around (especially for lovers of the wrestling dance off art like myself).

* Briley Pierce came out to emcee the bikini contest later in the show, but he was interrupted by Byron Saxton who proceeded to toss him backstage as he took over and introduced the ladies to the ring.

* Byron was clearly in favor of his boss, Summer Rae, as he announced her name with 10 times the enthusiasm he did the others. Each of them basically took their turn to walk around and disrobe to some tunes. Audrey Marie even used the Divas’ WrestleMania theme by Madonna of all things, haha.

* The crowd was pretty split between Paige and Audrey who dominated the cheers. Caylee and Sofia got a nice response, while Raquel and Summer were pretty much booed since the former is notorious as the top heel Diva, and the latter was portrayed as such tonight.

* Byron ended up choosing Summer Rae as the winner and she hilariously celebrated as if she had just won the Miss Universe pageant. She walked around waving elegantly and Caylee Turner didn’t seem to understand what happened as she started celebrating with Summer and hugging her until Audrey had to pull her back and tell her what Byron did. (Note: I mean this in the best way possible, but if WWE give Caylee Turner the same character Lacey Von Erich had in TNA, she will shine because she played it to perfection.)

* Byron helped Summer exit the ring and she went to the back. He then turned around to see a pissed off Paige staring him in the eye for not choosing her the winner. He backed up into the other four Divas, before starting to pose for them. Caylee Turner then bent down behind him, as Paige shoved him over her and the five of them removed everything but the boxers!

That was it for the Divas, but all together it was one of the best shows I’ve been to… and easily the best crowd. As always, if you’re ever in Florida and get the chance to attend one of the live events, I highly recommend it. They are always beyond entertaining for the entire time, and the cost for a ticket is ridiculously reasonable.

Check out some of the pics below: