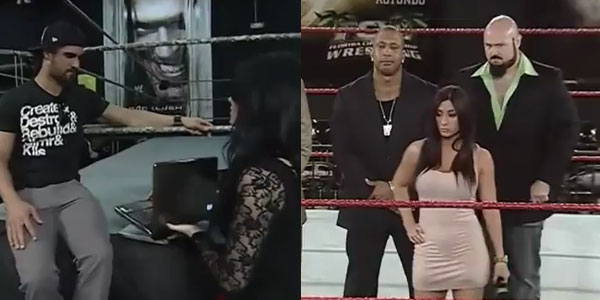 Welcome everybody to what may be the shortest recap in the site’s history. You see, this week we took a break from the recent string of matches the females have been partaking in down at FCW, and instead, got a few nearly silent segments! In fact, of the three women involved this week, only one of them actually said a word. I figured that because this is the official on screen debut of Paige (Britani Knight/Saraya), I shall bring it to attention in case next week gives anything more to what transpired tonight. In other news, Maxine is also present this evening, as she gathers the entire roster together for a pre-show meeting… but it appears that Summer Rae was a bit too preoccupied to show up on time. Now let’s get started!

FCW standout Seth Rollins can be seen sitting on the ring apron earlier in the day before the show got underway. Out of nowhere, a black haired “unknown” woman, that we of course can identify to be the newest addition to the roster, Paige, walks forward and presents him with an HP computer. (Clearly she wasn’t feeling the Apple he has going on seconds before.) She turns the screen to face him and seems to point him to an intriguing web page that causes him to blurt out the word “shoulder”. He looks back up at her in a state of confusion, but she quickly slams the laptop shut and scurries off, leaving him dumbfounded asking who she was, and reiterating the phrase, “shoulder”. Hmm…

Later on in the show we are taken to a full roster assembly that took place earlier in the day. Some familiar faces such as Audrey Marie, Sofia Cortez, and Raquel Diaz can each be seen amongst the crowd, while we then head inside the ring to see our General Manager, Maxine, standing alongside Norman Smiley, Dr. James Bronson, and her new assistant, Abraham Washington. First off, she thanks everyone for coming to the meeting, followed up with a compliment that they are all doing a great job here at FCW. A change of tone then hits, as she announces that she got a memo from the office stating that everyone must see Dr. Bronson before they can continue their job. Maxine adds on that she has already attended her appointment, which we saw a few weeks ago, and that it was “quite the experience”.

To somewhat build his credentials, Maxine proclaims that he is supposed to be the best in the world, and that nobody on the roster has a choice in the matter. Before she can continue, a door soon slams shut, and in walks William Regal, Summer Rae, and her scribe! The entire roster turns around to see what is going on, but the three head to the front of the group as Maxine glares angrily at a radiant Summer. The blond bombshell simply smiles and poses at our GM, before Maxine picks up where she left off when she was rudely interrupted. She then states once again that everyone must go to their appointment! From there, she concludes her speech and we head back out to the commentary table where Byron Saxton and Chris Russo discuss their future appointments and question what William Regal is doing alongside Summer Rae again!~

Thoughts: Hopefully I made this work and not look ridiculously small. To kick things off, I absolutely support the pairing of Seth and Paige. He is one of the most popular superstars in the entire territory, and working with him is only going to do wonders for her as she receives a prominent role on the television show. I’m pretty intrigued to see where this whole “shoulder” thing is going, but I like that there’s a bit of mystery as to wonder what she showed him on the computer that we couldn’t see. Absolutely can’t wait for the next two weeks to see how the rest plays out between them, and of course, whatever soon follows. Dare I say that if they team up I may collapse from the amount of greatness that would transpire?

I also really like that the Maxine/Summer Rae storyline has a spot on the show every single week. FCW gives all of their matches a good amount of time, and for that reason, sometimes certain angles or people don’t appear on each show because they simply don’t have enough time on the 42 minute program (once you cut commercials). No matter if the segments are brief, they get a spot each week to continue this program, and I like it. Summer, judging from last week, can definitely shine on a microphone when given it, and working against Maxine will only do great things for their promos together. I long for the day they get a couple minutes to really go at it back and forth as that will be a sight to see.