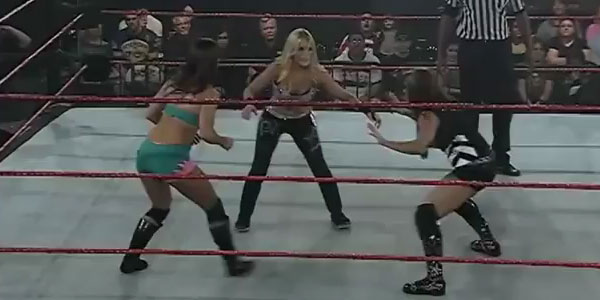 Hiya everybody, and welcome to your FCW Watch. Apologies for the lateness, but I have nobody to blame but myself for I accidentally forgot to do it at the time I normally do and just now remembered. Nonetheless, on last week’s show we had quite a lot of Diva action involved, as Raquel Diaz defended her Divas Title against both Audrey Marie and Sofia Cortez! Also, Summer Rae and Paige see a brief altercation at ringside, and Maxine is involved in a segment emanating from her royal office as our reigning FCW General Manager. Without any further ado, let’s get underway!

We head to the ring area with the brilliant Sofia Cortez making her way out to the ring looking great! Caylee Turner introduces the contest as a triple threat match for the Divas Title, which must be why Sofia looks more determined than ever to succeed. Cortez steps into the ring to the applause from the crowd, and up next comes the upbeat theme of the equally awesome Audrey Marie! Audrey steps out from the back in some pink and blue gear, as the crowd seems split with who to cheer for between the two. Finally, out comes the devious Raquel Diaz with her title intact. Raquel poses for the camera as she climbs up the stairs and enters the ring for her big defense. The bell then sounds and we kick things off!

The three circle around the ring a bit, before Sofia and Raquel agree to double team Audrey. Marie rolls through an attack and begins taking down both ladies with some arm drags and clotheslines! Audrey connects with a dropkick to Raquel, but a pin is broken up by Sofia, who then throws Marie into an opposing corner of the ring and runs forth with a splash. She then sends Audrey into Raquel, who kind of spears her to the ground. The two ladies slap hands and work over the fan favorite with some kicks and smacks to the chest. Audrey tries to fight out, but Sofia topples her with a nice spin kick as Diaz slams her down face first.

They continue to double team the Houston native, until she begins to fight out with a few slaps of her own until Sofia regains composure! The two work her over with some kicks, before Audrey finally begins to mount a comeback. She tries to Irish Whip Sofia into Raquel, but Cortez manages to stop herself from colliding. The two then turn right around into a nice front dropkick by Audrey, who goes for a pin on each lady but only gets a two count. They Irish whip her into the ropes, as Audrey goes for a double clothesline that both women duck. From there, they connect with a mild flapjack into the ropes.

The crowd tries to get behind Audrey, as Sofia and Raquel finally turn on one another! They exchange punches to the face, until Audrey rolls Diaz up for a two count. Sofia then runs right into a chop to the chest, as Marie continues to take the fight towards both women. Audrey bangs their heads together and sends Raquel to the outside where Sofia dropkicks her off inadvertently. They exchange holds for a few in a kind of messy way, before Sofia is sent into the corner. She slides through the ropes nicely, before climbing to the top rope and coming off with an okay crossbody. Raquel then slides into the ring, before getting tossed right back out. Audrey connects with a swinging side slam type move, but Diaz grabs her and rolls her up, before getting tossed forward on top of Sofia! She covers and gets the victory!

We head to the ring as a match between Seth Rollins and Brad Maddox is underway. The amazing Summer Rae and her scribe Rob Naylor can be seen at ringside, as she has seemingly signed Brad Maddox to the stable she was discussing a few weeks ago. Seth goes to run off the ropes and look for his one footed curb-stomp maneuver that I love, but Summer proceeds to grab him by the foot and take him off his game. Suddenly, the scribe feverishly taps her on the shoulder, and out comes Paige to shove Summer on top of Naylor! The two fall to the floor, as Paige (aka the enchanting raven haired lady) quickly leaves. Seth then hits the one legged curb-stomp for the victory, much to the dismay of Summer Rae!

Backstage we go to see Maxine praising the current FCW ratings to Abraham Washington. Suddenly, Norman Smiley walks in and lets her know that the President of FCW, Steve Keirn, wants to see her in his office. She and Abraham let Norman know that she is very busy and can not make it, but Smiley doesn’t let up. He even offers to take her there himself! Maxine begrudgingly gets up from her seat, as Abraham reassures her that it’s okay since she’s the boss. Once Maxine walks out, Abe takes a seat in her chair… obviously hinting that he seems to be plotting for her job! Dun dun dun!

Thoughts: Oh dear, this match just never really connected. I know triple threats are insanely hard to be in (which is why I wonder why we keep seeing them…but that’s another question for another time) but I wish this would’ve come off better. I don’t want to personally comment on what went not so good with it because honestly, I’d rather talk about the moments I did enjoy since harping on negatives is simply a waste of energy. I really liked the ending and thought it was nicely done with Raquel being kicked off onto Sofia for the win. They paint Raquel to be the heel champion who always somehow manages to take advantage with the pin, and I think she plays it perfectly. I’m sure some people will tear the three up, but eh, that’s just not how I look at things. Not one person in wrestling can say that every match they’ve ever had has been phenomenal since they all have to start out as a beginner, therefore I take this as simply a match that didn’t go well. Triple Threats just don’t work in FCW so please no more of them!

In other news, words can’t describe how much I like both Paige and Summer Rae. I am so happy they get to work a brief segment together even though I’m pretty sure both their current roles will be transforming elsewhere after the past taping report came out. Summer has really surprised me in how well she’s adapting to playing her character. I’m not going to lie, when she was first signed I imagined they would make her ring announce for a good six months like most of the new Divas do but this has been a welcome surprise. Paige.. .what can I say? She can do no wrong in my eyes and anything she is involved with I will stand up and applaud her mere presence. So excited for her to start wrestling in the division soon.