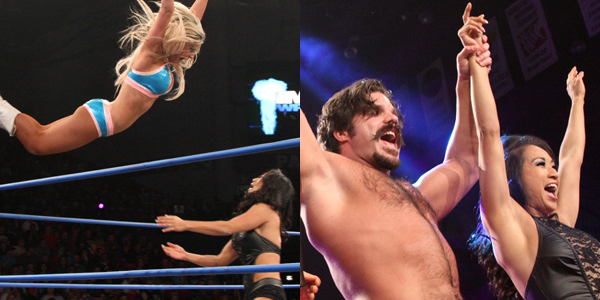 What’s up Knockout fans and welcome to this week’s Impact Write-Up. Eleri is living it up in London this week so I’m taking over the reigns for one week only! Last night’s Impact was a wild night as Knockouts Champion Velvet Sky teamed up with Taryn Terrell (it’s her debut match!) to face Tara and Taryn’s arch nemesis and my future client when I become a top heel manager, it’s Gail Kim. However, since Taryn has been stripped of her ref duties (and her clothes by the looks of her new attire), we haven’t seen Brooke Hogan appoint a replacement. Tonight, she gives the ever creepy Joey Ryan – and his zebra print thong – a chance. Ok then….

On top of all that, Brooke has her traitor of an ex-husband to face in the ring. What will she say to Bully Ray? With bullies, Hollywood power couples, sleazeballs, pigeons and hot messes to come, am I about to watch Jerry Springer or a wrestling show? Only Claire Lynch could make that preview even more controversial, so before you all burst from excitement, let’s get cracking!

Up first this week, we see Knockouts VP and ‘About Us’ singer Brooke Hogan fretting backstage like a headless chicken. To make matters worse, Joey Ryan makes his presence felt in her office. He first asks if she’d like a suck of his lollipop (innuendo 1) to which Brooke is flabbergasted at. Mr Ryan then says he has an offer for Brooke yet she says she’s technically still married and she already told him no in the past; juicy stuff coming out here! He then tells Brooke that he could fill her need (innuendo 2) and Brooke has had enough. However Joey quickly explains that he’d like to replace Taryn as referee tonight as he is already in black and white clothes, including his zebra print thong. Funny stuff. Brooke decides to give him a chance yet he cannot touch the girls! Let’s see how long that lasts…

We’re in the arena now and Gail Kim’s theme song (that should be number one in every chart in the world) plays through my ears, giving them the most pleasure since the last time they heard Dixie Carter‘s sweet, sweet song. Gail is tagging with Tara tonight and of course, the cockroach that is Jessie is ringside. Out next, it’s the Knockouts Champion Velvet Sky, and her partner, the “Hot Mess” Taryn Terrell. By the way, that nickname is hilariously bad. Why would you want to be class as a mess? However, I do agree with the hot part as Taryn is looking SMOKING. Joey “checks all the girls for foreign objects” a.k.a gropes them and then he has a feel of Velvet’s backside, cheeky beggar! Velvet seems riled by this and she turns her back, allowing Tara to club her down. Joey doesn’t care about fairness and signals for the match to start!

Tara starts off her offense with a choke over the top rope followed by a knife-edge chop. She whips Velvet across the ropes yet Tara’s earlier behind-the-back attack didn’t hinder Velvet too much as she is the one who decks Tara with a collection of clotheslines. Vel then applies a side headlock which is broken up because Joey starts massaging Velvet! This gives Tara the opportunity to tag Gail in. When she does this, Taryn shouts at Velvet to let her in; she wants her hands on Gail! Taryn is tagged in, yet Gail immediately brings Tara back into the match as she wants nothing to do with Miss Terrell!

Taryn ducks a punch from Tara and hits her with a backslide, then a schoolgirl and then a jackknife cover, yet Joey calls none of the pin attempts as he is check out Taryn’s ASSets. Taryn then applies a wristlock on Tara before tagging in Velvet. The Blondtourage 2.0 hit Tara with a double shoulder knockdown before dropping a tandem elbow on her. Velvet goes for the cover, yet once again, Joey is busy ogling Velvet’s rear-end. Out of nowhere, Gail then flies right at Velvet and takes her out, and Joey doesn’t care; the more women in the ring, the better for him! Gail then tags her way into the action after Tara thrusts Velvet’s head into the top turnbuckle. Gail lashes at Velvet with a series of kicks and forearms before dropping her with a fireman’s carry front slam. Joey doesn’t call the count for her either, so both sides are seemingly annoyed by his actions. Gail however, seems to be getting a little flirty with Joey; tactics perhaps?

Tara is tagged back in and she thrusts her shoulders in Velvet’s torso. I am then distracted as a DIXIE CARTER ACTION FIGURE advertisement comes on the screen. WOW. If I still had action figures, I’d totally buy that and make her my Women’s Champion. Sadly, my parents made me give my collection up aged 14 as I was “too old for them”. It was an emotional day… Meanwhile, whilst wiping my tears away after that sad period of reminisce, Joey has moved Tara away from the corner and put his hands all over her. Cue Jessie, and we have a stare off between the two wormiest of men on the Impact Wrestling roster. Tara hugs Jessie and it nearly costs her as Velvet rolls her up. It didn’t cost her though, as once again, Joey was partaking in some serious mental photography. Tara then drops Velvet with a clothesline and goes for her signature shimmy standing moonsault. However, she misses, crashing to the mat stomach first. Could this be Velvet’s opening? It sure is!

Gail tags into the match yet so does Taryn! The “Hot Mess” (still chuckling) levels Gail with a series of clotheslines, followed by a suplex. She then throws caution to the win and climbs up high, nailing Gail with a fantastic crossbody! Taryn’s inner hellcat then comes flying out and she starts ripping the hell out of Gail’s face – love it! Tara then illegally gets involved, attacking Taryn from behind, yet Velvet evens the odds and sends Tara packing. Gail then gets rid of Velvet and starts posing to the fans. Gail then turns her attention to Joey and is getting all touchy-feely, ooh err! Then, out of nowhere, Taryn rolls Gail up and she gets at least a 6 count but Joey has his back turned and is oiling his body up for Gail. Gail then reverses the pin and does one of her own. Joey makes an ultra quick count and this one is all over.

Joey tries to celebrate with Gail but it’s clear that the #KIMPACTFUL one was just using him. Joey returns to the ring in the hope that he can have a triple threat (if you know what I mean) with Taryn and Velvet, yet Taryn whacks him with a low blow. I’ll assume that Joey’s refereeing days are officially over.

We catch up later in the show now just after the main event, and Bully Ray has called out his wife Brooke Hogan, and she’s being escorted by two shifty looking security guards. Knowing TNA, these two are nobodies, so that will mean they will no doubt become the next two Aces & Eights members! Bully questions as to why Brooke isn’t wearing her wedding ring but she has no doubt done the sensible thing and pawned it in. Bully calls her “Brookie” but then quickly turns cold and calls her “woman”. He then says that after LockDown, Brooke was a “crazed woman”, a “lunatic” and “insane”. I am watching Jerry Springer, right? Or maybe it’s Maury, Trisha Goddard or Jeremy Kyle? Easy mistake to make.

Bully then says that because her husband won the title at LockDown, she should have been happy, to which she yells “YOU’RE A TRAITOR” at him. Edge of the seat stuff right here. Bully then gets graphic and said that basically, Brooke should have all over him. But he says he forgives Brooke for being an “insane woman”. He then addresses the envelope in his hand and Brooke hopes that it contains divorce papers. Unfortunately not Brooke! Bully presents Brooke with front row tickets to next week’s show and he says that he wants Brooke to watch him beat Jeff Hardy again. I get that the gift was meant to be symbolic, but what a waste of money, give them to me! And tickets for flights. And accommodation. And the chance to meet Gail Kim. Thanks. Bully then says he wants Brooke to look her best because she’s let herself go the past few weeks. Ouch. Brooke then rips up the tickets and slaps Bully Ray; you go girl! Bully then brands her pathetic before telling her to get out of his ring as all irrelevance ensues and Jeff Hardy runs out.

Thoughts: Firstly on to the match, it was ok. Normally in wrestling, if you want comedy, you have to compromise on the action, and that’s what happened here. The match run of the mill in terms of technique, yet I did enjoy the comedy surrounding Joey. A tertiary storyline (other than who will challenge Velvet next and the Taryn/Gail rivalry) of who will replace Taryn as the Knockouts ref. All the girls hates Joey’s involvement, yet him being there put over Gail’s ability to be a crafty heel so well. Jessie involvement was also pretty funny too. I have to say that it was great to finally see Taryn back in the ring after so long as I love her rough-around-the-edges style in the ring. She’s a bit heavy handed and a bit rough, not normal traits for your typical “model” type, and I really like that.

Onto Brooke Hogan’s saga, I don’t mind Brooke at time, yet I feel that it will be so much more interesting if she was to turn heel. I’d love for her to sit at ringside next week and cost Jeff Hardy the chance to reclaim his title. It wouldn’t be unpredictable, but it would be intriguing. From there, perhaps she could feud with Velvet and start acting like an evil dictator and call herself Brooke Jong Un. Ok, maybe not quite that! Excited to see Taryn and Gail square off next week though, I’m sure it’ll be a stellar contest. And with that, stay tuned, Jack will be back!