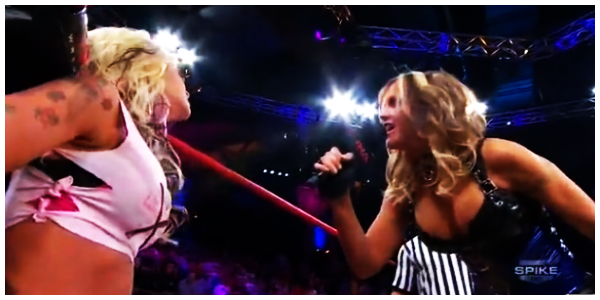 Unless you’ve been living under a rock for the past few months, it’s plain as day to see that the Knockouts division is slowly going down hill. The girls are being turned into pretty face divas instead of being allowed to get down and dirty, and be the Knockouts we all know they can be. This week’s Impact was another sign that the times are changing with the little Florida based company that desperately wants to compete with the billion-dollar empire that calls Connecticut home. Last week’s lock box disaster included contract winner, Velvet Sky, announcing that she would be facing Angelina Love in a Leather and Lace match. We got that match this week (sort of) and a lot more.

Angelina is the first competitor to make her way to the ring. I’m not seeing much lace on her outfit, but whatever. She’s got the TNA Knockout Championship strapped around her waist so I guess she can do and wear whatever she wants. That’s fair. She looks gorgeous, either way, and right at home with that title. The crowd gives her a nice reaction and it’s cool to see Angelina as champion again even if she won it in a cheap way. Velvet comes out second and she’s got her title and a microphone. She stops at the ramp and announces that tonight’s match is not going to be leather and lace because none of the perverts deserve to see her goodies (nevermind that she was more covered up this week than usual). Angelina rolls her eyes, not surprised, because she knows better than anyone than Velvet is all about shenanigans. Velvet smiles so pretty and says that tonight she is going to face Angelina in a handcuff match and that she was gunna whip that booty. Angelina perks up and gets annoyed, especially when the referee starts to manhandle her. He slaps those cuffs on her pretty tightly and Velvet makes her way to the ring once Angelina is secured.

To Velvet’s surprise, Angelina is the first to mount some offense. She stiffly kicks Velvet as she’s slipping between the ropes. Velvet goes down and begins screeching her head off, while Angelina happily puts the boots to her ex-best friend forever. The referee eventually pulls Angelina off Velvet, which gives the devilish Miss Sky the chance to grab the Knockout Championship and hit Angelina with it. Angelina goes down like a ton of bricks and Velvet takes control. She motions for the microphone and tells everyone that she forgot something. The match is now under “I Quit” rules. Velvet starts to beat on Angelina and show her who the true beautiful person is. Angelina basically has no fight at this point because well she’s handcuffed and got smacked with a gold belt. The beat-down is pretty weak, but props to Velvet for protecting Angelina during it. Velvet continues her offense and in a really cool spot, she starts choking Angelina with her own hair. Once Velvet tires of that she gets up, grabs the microphone, and demands that Angelina say those two magic words. Of course Angelina refuses.

An annoyed Velvet goes back to work. She slams Angelina’s face into the mat over and over, then grabs her riding crop and makes good use of it. Angelina refuses to quit again, so Velvet picks her up and rams her head first into one of the turnbuckles. Angelina is dazed and woozy, and Velvet screams at Angelina that maybe she will quit if Velvet strips her naked. Why am I not surprised it’s going there? The crowd seems to enjoy that idea so Velvet rips off one of the Angelina’s five layers and demands that she quit. Angelina repeats herself. In fact she says, and I quote: “I said no, you bitch.” Velvet goes nuts and that’s the signal for Madison Rayne and Lacey von Erich to come bouncing out. Lacey’s smiling like always. Madison is all business. They start a 3-on-1 assault on the champion. It doesn’t take long for Tara to make her way out and make the save, clocking LVE in the process. The Beautiful People scatter and Lacey cries that Tara slapped her boob, lol. Did I really just write that?

Tara has the key to the handcuffs and finally frees Angelina. Angelina is a little shaken, but seems pretty grateful for the help. She extends her hand towards Tara as a peace offering of sorts, but Tara refuses and turns her back on her tag partner for this Sunday’s match. Angelina simply shakes her head and we find ourselves left with some more questions, but ones that have seemingly predictable answers.

The Good: The Knockouts will be featured on Lockdown this Sunday. In this Bischoff/Hogan Era, the Knockouts appearing on a pay-per-view isn’t always a done deal. I’m thrilled we get to see the girls in action on Sunday and I really hope they’re given a decent match. It’s unfortunate their match announcements are only coming a week before the PPV now, but in this instance I think that’s kind of okay given how long they’ve been building up this Beautiful People/Angelina and Tara feud. These girls have been mainstays on television for awhile and they’ve been given the matches, promos, and segments to make this a pretty memorable contest.

Angelina and Velvet work very well together. This segment was sloppy, yes, but both girls played their parts extremely well. I love the fact Angelina refused to give in. She was portrayed as a prideful, stubborn bitch which is everything a champion should be and more. A lot of us disagreed with the way she got this title, but since it’s done and over with, we all have to look at the bigger picture now. TNA has always loved Angelina as champion and I expect her to get a good few months in as the premiere Knockout, feuding with Tara along the way. I fully expect her to retain at Lockdown and become one half of the tag champions along with the aforementioned Californian, so we’re going to get set up for the classic “Can I Really Trust My Parter” storyline.

Not sure if this was a good moment or a bad one, but it was one of my favorites last night. When the Beautiful People started their 3-on-1 beatdown on Angelina, Tara came out to make the save. Madison and Velvet got the heck out of dodge and Lacey stayed in the ring. Tara clocked her pretty good and it was just funny to me because I even said to my TV, “get out of the ring, Lacey.” Maybe I’m the only one who picked up on that but it was great, haha.

The Bad: The segment as a whole seemed a little off to me. I’m not sure if it was because of the commentary or what. The beat-down was not as vicious as it could have been. Velvet should have beat the crap out of Angelina, but instead she just went through the motions. Sure, she did great doing just that, but Velvet is in the middle of a huge push and I just expected a little more. The handcuffs were great but beating Angelina with a riding crop? Those things just don’t hurt. Nevermind how I know that, but take my word for it. Why not let Velvet use the ugly stick to beat Angelina ? I believe that would have made the attack look more brutal and personal.

The fact Velvet didn’t make this match for the title was also bad. I know the Beautiful People basically play the ditzy blonde gimmick and whatnot, but she had the chance to have any match she wanted. Anything at all. Why wouldn’t she make it for the title? This could have been a great segment with a fantastic swerve if Velvet would have done her beat-down, made this for the title, and pinned Angelina to become the new champion. It just would have been unexpected and would have further this feud a little better. Lockdown could have been a bloodbath and Angelina could have gotten the belt back. TNA has already made a mockery of the Knockout Championship by allowing it to change hands via lock box, so why not whore it out for the purpose of making a hot storyline smoldering? I’m just sayin’…

The Ugly: Velvet got screwed character wise by TNA management on this one but what else is new? Tara got screwed last week. Sarita, Taylor Wilde, ODB, and Hamada get screwed every week. The Beautiful People are on the cusp of having the shortest tag title reign in Knockout history which is ridiculous because they’re the only legit tag team the company insists on using. TNA is poor when it comes to booking and using people correctly but since my expectations are so low at this point, I wasn’t too horribly bothered by what I saw tonight. I don’t really consider it to be that ugly. It was just a mediocre night for all of wrestling.

Lockdown is this Sunday and The Beautiful People will face off against frenemies Angelina and Tara. The winners will take everything in this match seeing as how all three titles will be on the line. I’ve already said that I think Angelina and Tara will pull this one off and be forced to co-exist as tag team champions. The next few weeks/months are going to tell us a lot about TNA. Are they going to start taking the Knockout division seriously again? Time will tell, but I won’t get my hopes up. I’ll take it one week at a time and focus on Lockdown. Who doesn’t want to see Lacey von Erich wrestling in a cage?! My bold prediction is that she will have a huge moment in the match. Her moment will be so big that she will leave us all with our mouths agape and shaking our heads going WTF DID THAT REALLY JUST HAPPEN?!?!?!?!111?!11?? Believe it, guys. Lacey is going to come into her own one day. Why not Lockdown Sunday?

And speaking of Lockdown, I’m out until then. Sound off in comments about Impact and vote in the poll below. What direction do you see the company going? Did you actually enjoy Impact?