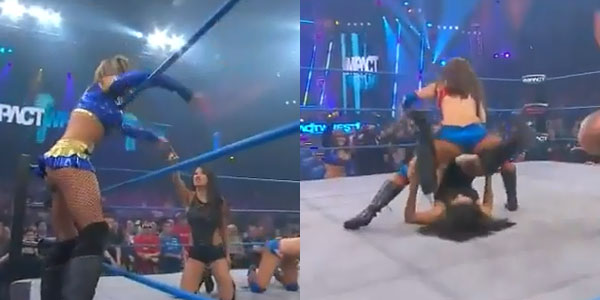 Five hundred twenty-five thousand six hundred minutes. What is this referencing other than being a lyric to Seasons of Love by Rent? It feels like the eternity of time I’ve had to sacrifice without seeing Miss Karen on TV. I just felt that needed a shout out, okay?!

Now, if you’ve been following Impact Wrestling as of late, Gail Kim defeated Velvet Sky (albeit using the tights) to retain her championship at LockDown Sunday, and as we’ve seen before, challengers can be dropped at any minute from feuds, so will Velvet maintain her top contender status? We will have to see as it’s an eight woman tag team match featuring Gail, Madison Rayne, Sarita (with soccer mom dance), and Rosita against Mickie James, Velvet Sky, Tara, and the returning Brooke Tessmacher!

Out to the ring we go, and unfortunately for Taz, no pan up shot of Christy Hemme greets him. Let’s just all assume it was placed somewhere else in the show and think happy thoughts! “She’s a KILLLLERRRRRRRRR QUEEEEEEEENNNNNNNNNN” graces my eardrums, as we see Gail Kim already in the ring. Making their entrance is the trio of Sarita, Rosita, and Madison Rayne (who amazingly walks right through the Bean Burrito Sisters’ entrance dance to promote herself). Rosita removes the hoop earrings as all four women now stand in the ring and Sarita graces us with a BRIEF soccer mom dance.

Up next comes what was personally my non-Miss Karen highlight of the year for Impact Wrestling in 2011, Tara and Brooke Tessmacher aka TNT! The two ladies walk down the ramp and complete their coveted entrance in which TESSSSSS-MACHA removes her top and the two share a kiss. They are immediately cut off by the angelic sound of “HARRRRRRRRDCCCOORREEEE COUNNNTREEHHHHHH”, as Mickie skips her way down the ramp and I sing along to her theme song. (Yes, even “heels and stones”… Don’t judge.) Finally, out comes Velvet Sky, as Taz begins to inform us how angry he’s been at the lack of pigeons. Without his Christy Hemme pan up shots either, I don’t know how he’s still here today! Thankfully, Velvet gives him some form of treat as she DOES let the pigeons Loose.

We head to a commercial break, but thankfully in Internet recap world, that does not last but a mere few seconds as we return and the match gets underway with Sarita and Velvet. Sarita goes for a back suplex immediately, but Velvet counters it and lands right on top of her. From there, Sky charges off the ropes with the whirlybird headscissors and then targets Gail Kim stat. Sarita knees her in the back and tags in Rosita, as the two go for a double team move that sees Sarita hip toss Velvet and Rosita go for a standing senton… however, Velvet rolls out of the way before the latter and the smaller Bean Burrito Sister injures her buttocks.

Sky with a set of jawbreakers, before charging off with a bulldog. Sky once again goes after Gail Kim, as Rosita now tags the Knockouts Champion in. Kim controls Velvet with a sick clothesline for a near fall. Gail with a knee, as she proceeds to taunt the crowd. This proves to be an unfortunate distraction, as Velvet scores with some chops and kicks to the champion. She sets her up for the “In Yo Face”, but Gail slides out and immediately slap tags Madison in, sparking an “Ow” from our Killer Queen. Rayne runs right into a drop toe hold from Velvet and tags in Mickie James.

Velvet snapmares Rayne as James runs off with a dropkick and takes the rest of Team Rayne out. Mickie scores with her flapjack into a kip up, as she then ascends to the second rope. With Rosita distracting the referee, Sarita runs up and tosses Mickie off the corner and throat first onto the ropes. Ouch! Rayne goes for a quick pin, but Mickie kicks out. This sparks Rosita to tag back in, who teases Mickie and then kicks her in the stomach. Rosita proceeds to run off with a beautiful hurricanrana, but Mickie kicks out. Clothesline attempt by mini Bean Burrito Sister, but Mickie scores with the arm trap neckbreaker!

Sarita and Tara then get the tag in as Tara levels her with a few punches! Tara continues the momentum with a shoulder breaker and then a back body drop. She follows it up with a body slam, before imitating Sarita’s soccer mom dancing and then moves into the Shimmysault! She goes for a cover, but Rosita runs in and tries to break it up… unfortunately for her, Tara moves out of the way and poor Rosita drops the elbow on Sarita. With that, Tara tags in Brooke Tessmacher, and the two look to double team Sarita with a double team hip toss. Sarita flips off the ropes and…Y ES! Sarita breaks out the FULL ON soccer mom dance!

TNT drop her with a double elbow and provide us with a soccer mom dance of their own, before Tara exits the ring. Brooke then runs runs forward with an awesome flipping armdrag to Sarita. From there she leaps onto the second rope and looks to go for a monkey flip, but changes it up and hits a nice facebuster to poor Sarita. Madison quickly breaks it up, as Gail blind tags herself in and feels the wrath of the Tess-macha! Brooke scores with a few quick clotheslines and drops Gail with a nasty back suplex front slam (clearly this is my own technical wording of the move).

Suddenly, in come all eight women to fight with one another. Velvet and Madison, Tara and Sairta, and Mickie and Rosita all exit the ring in a big brawl. Meanwhile, back inside the ring, Tessmacher goes for a monkey flip on Gail. Kim simply slams her down to the mat and goes for a pin which involves a certain pair of feet placed slyly on the ropes. Thankfully for Brooke, Velvet Sky was standing ringside and swipes Kim’s boots off the ropes. This distracts the Knockouts Champion long enough for Tessmacher to score with a roll up! One… Two… THREE! The Tessmacha has upset Gail Kim! Team Rayne seems to be in shock, as Brooke’s kick ass theme song hits and I again become distracted trying to keep up with what happens due to this music. I do notice Velvet taunt Gail for losing though, as Kim looks on in shock with what has transpired here tonight!

Thoughts: Starting with the match, it was pretty fantastic. TNA does multi-woman matches right, and allows them all the chance to shine. Once again, I commend the company for taking the commercial break in between the entrances and the match because it greatly helps me to enjoy things when I don’t miss half of it due to a commercial. In particular, Sarita, Rosita, and Brooke were the highlights for me. Rosita’s hurricanrana was awesome, as was Sarita’s flip off the ropes into the soccer mom dance. Brooke was on fire the whole time she was in there and she showed off how much better she has gotten to be. I am firmly behind the Tessmacher for champion campaign and I would love to see it happen. Speaking of which…

Hallllllllelujah! I am over the moon with TNA more than I have been since my beloved Miss Karen departed. Finally, someone fresh and new seems to be getting spotlighted as the top challenger for the Knockouts Title. Don’t get me wrong, I am a huge fan of Velvet Sky and I do think it’s another big WTF that she’s seemingly out of the hunt again (although judging by the ending, I can’t even tell if she is or not), but I am also a monster supporter of the Tessmacher, so to see her finally be given a storyline/shot/appearance at all is wonderful. Do I hope she wins the title off Gail? Heck, yes. I’m not sure if I see it happening, but now we are really getting down to the wire on who is left to challenge her. Unless they start going for heel vs. heel matches, I don’t think there are any faces left Gail hasn’t beaten in singles matches during her reign except Brooke. They could do the Taylor Wilde story again and bring in an independent woman for this Open Fight Night to “shock the world” and end Gail’s reign, but title wins on your debut never go over well with crowds in the long run so we’ll have to wait and see what happens.

Oh, and as per this Open Fight Night schtick, I demand everyone to tweet whoever is in charge of TNA and make the Blossom Twins win the Knockouts Tag Team Titles! That is all.