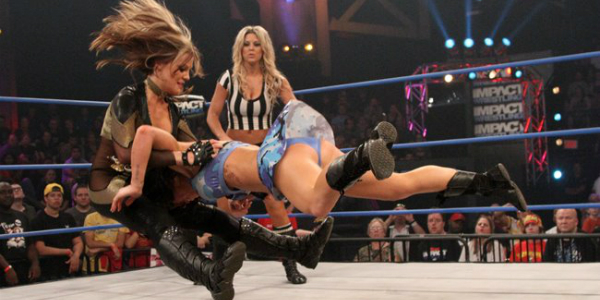 When Ellie Goulding came up with the song, Anything Can Happen… she sure wasn’t playing us.

As always, welcome to this week’s Impact Write-Up, as I, Bobby, bring forth your Knockout related goodness from the second to last episode of the show that will ever air provided the December 21st theory holds true. This week, Velvet Sky shocks the world by donning a bodysuit, as she takes on Madison Rayne in singles competition. Plus, Mickie James is pissed off regarding what happened at Final Resolution, and gosh darn it she is not going to just walk out like everything’s fine and dandy. Also, Tara and Jesse confront Brooke Hogan about the fact that the Knockouts Title is on the line next week, and more!

The video begins with recently returning, Velvet Sky who looks pretty darn excited. She is speaking to someone, presumably a camera man although my wild imagination wants me to think more into it. Who is this mysterious camera man that never reveals themselves to the viewing audience? Anyways, Velvet pretty much says how excited she was to return last week, claiming that all the fans were on their feet. I guess panning to a clip of a zoomed in camera angle as Velvet shake, rattles, and rolls her pigeon holder on the ring apron last week shows us one of the reasons why. She’s been gone for six months, but she’s back and ready for the Knockouts Championship. Suddenly, as I’m attempting to type, my eyes are overtaken with the sight of Velvet swaying her hips around and going “ooh ooh”, as apparently the pigeons have been cooped up inside her… her… wait a second!

Is that a bodysuit? I know Velvet’s tweets show she is a fan of Rita Ora, but R.I.P. must have spoken to her because the days of the skirts we used to see are over. Anyways, we head to commercial so I can recuperate from this shocking transformation, and she will be heading to the ring for a match against Madison Rayne next!

(Side note: This was included in the video I watched when recapping, but apparently it’s not anywhere else so enjoy my random thoughts on a Christmas themed Knockouts commercial) But before that, it’s Christmas time for the ladies of Impact Wrestling. Since I’m sure you’re all sitting with your families in front of an open fire while reading this, why don’t you, mom, dad, grandma, grandpa, and even Skippy the dog indulge this holiday cheer in the form of Christy Hemme sensually licking her large lollipop, So Cal Val executing a slow-mo hair toss, and ODB patting her bottom in true ODB fashion. Oh hey, mom and grandma get something to take in as well, since for some wonderful reason Joey Ryan’s brilliant 70s porno stache shows up, too. We then come to the end of this overtly dramatic theme music that feels like I should be sitting in the Coliseum watching two Roman gladiators fight for the hand of some sort of royal princess. (Which by my Diva Dirt contractual obligation, I must reveal is Dolph Ziggler and Matt Striker fighting over Cryssi.)

Just then, the woman whose country singing accent is one I wish I could master myself shows up, but it’s now hard for me to attempt singing one of her catchy songs because she looks to be in tears. Mickie feels that she let both herself and all of her fans down at Final Resolution by not winning the Knockouts Title. We fade into a highlight reel of said match, which is accompanied by some more dramatic music that I now begin to feel like Impact Wrestling has a folder on their computer filled with. Mickie’s disappointed in herself, being she’s the best damn (+2 points for cursing) female wrestler in the world and allowed that to happen! That is bull(censor)! (+3 points for dropping the B.S., but -2 for not sneaking into the production truck and stopping the massacre that exists known as a censor bleep.)

And because Impact Wrestling knows just how to make my recaps filled with holiday joy, we head to the arena for this week’s pan up shot of Christy Hemme! Okay, now I’ve got a bone to pick. This has been some time coming, but you know, Christy Hemme really needs to start going into business for herself. If she designed her own attire, or even partnered up with various brands, she could make fortunes in promoting it on TV with how close that camera gets to her on a weekly basis. From her boots to the tip of her head, we see every little nook and cranny, and partnering up with a company could make her a few extra dollars on the side. Plus, we all know how much everyone loves the sound of money. But alas, it’s just a thought. However, if I start seeing logos on her during these pan up shots of the week, I expect a cut of the dough.

Oh hey, it’s Madison Rayne! It feels like forever since we’ve seen her aside from the battle royal Mickie won, and I will be the first to say that she and her theme music have been missed. I’m going to assume Madison elegantly waves as she walks down the ramp, because I’m too busy singing along to her song right now and can’t properly focus. I don’t know why there is some sort of unrecognizable man’s voice talking over the song, but hopefully he learns quickly to not interrupt in the future. Madison appearances are scarce right now, and I need every bit of the song I can get.

Out of nowhere, Madison’s song stops and now comes the catchy, yet lyricless so not as fun of a jam to sing along to theme of Velvet Sky. It appears that Velvet either wants to be a superhero (which is pretty awesome), has turned her back on the fans by keeping the pigeons locked up (which is not awesome), or maybe Tara went through her bags and stole her gear like her name was Jacqueline, and thus next week we will see Tara confronted by Sky, called a psycho bitch, and thrown into a set of lockers as Jesse maybe misses his flight or something and thus can’t intervene. Velvet extends herself between the top and middle ropes, but the camera man just doesn’t seem to be feeling his shot with her new bodysuit. There was no insane zooming in and out. There was no shakiness from nerves and excitement. It was simply an “oh hey I’m on the wrong side, so let me stroll over and stand here just in time to get what I can.”

Velvet poses in the corner turnbuckle, but as she hops down and turns around, she pretty much nearly collides with our killer queen. TNA President, and the leading lady of life, Dixie Carter suddenly plugs her Facebook account, which infuriates me… because when I went to friend her it said she had already attained too many and I could not become one. Our OVW Women’s Champion of a referee, Taryn Terrell doesn’t look impressed with Madison’s pageant queen waving, and Velvet Sky decides to go full on superhero by standing with her hands on her hips. Following that, she turns around and sticks her ass out, telling Madison to kiss it. While I can’t picture Superman or Batman pulling a move like that, it’s the thought that counts and we kicks things off as Rayne attacks her from behind.

Taryn orders the bell to be rung, and since whoever is ringing it doesn’t want to mess with her, they do as told. Madison starts beating Velvet in the chest, but following a few Irish Whipes, Velvet takes control with some head smashes into the corner. Sky then slaps the queen’s royal bottom, before snapmaring her down and hitting a kick into a necksnap… into a dropkick as well! I now have to skip ahead a little because Dailymotion is the worst website in the world with it’s constant need to show advertisements every two seconds, but when I land in a new part, Madison has Velvet in the ropes and is choking her with her leg. The crowd gets behind Velvet, but the Killer Queen decides she is going to hit a reverse faceplant (backplant?), and then position her in order to connect with the head slam into the canvas for a two count.

Madison screams what I believe is “WE WANT MISS KAREN”, however upon further watch, I realize it was “C’MON TARYN”… close enough. She doesn’t look happy with the OVW Women’s Champion’s officiating, but she takes her eye off the game long enough for Sky to hit a kick and some chops. Velvet scores with a few heads to the thigh, following it up with a comeback of clotheslines and a bulldog. She attempts the In Yo Face, oh wait, she actually hits it for the victory. Velvet poses on the turnbuckle and motions that a certain title is soon to be around her waist, and since the Knockouts only legitimately have one, we can assume it’s Tara’s.

Thoughts: I enjoyed this episode of Impact Wrestling almost as much as I enjoy watching a Lyric 145 performance, which is most definitely a compliment as I bleed Lyric 145. Mickie’s segment was truly perfect because as we’ve seen time and time again, TNA has a history of just dropping a feud after the proverbial pay per view title shot, (or in ODB’s case, even before that) so it was nice to see her actually get some spotlight and show that just because Velvet’s back doesn’t mean we get to forget about her. Not only was it nice to see her, but it was nice to see her showing actual emotion. She was pissed off, and she should be. Calling herself the best damn womens wrestler in the world could spark signs of that beautiful Mickie/Velvet/Tara feud that I’ve been hoping for, but I’m not going to look into things too much right now because Mickie has been teasing this type of behavior for what feels like months and then it just dissolves.

The match was pretty solid, and I actually think it was a step up from their previous encounters together. The only thing that felt a little off was the ending to me because it seemed kind of soon to hit the finisher. But honestly, my opinion means diddly squat and I trust that there was probably a reason for it to happen that way. Maybe this newfound bodysuit fame has turned Velvet into a new, unpredictable woman who doesn’t play by the rules and instead makes her own. Maybe Madison simply knew that if she challenged Sky-woman like an evil villain, she would be no match for that shield of armor and just gave decided to give in. In other words, I enjoyed getting to see Velvet and Madison face off once again, and it’s nice to have more than two faces shown on an episode.

Until next week, I’ll be spending my time thinking of unique superhero names to call Velvet in future recaps as Sky-woman is too bland for me. If you’ve got any, drop them below in the comments!