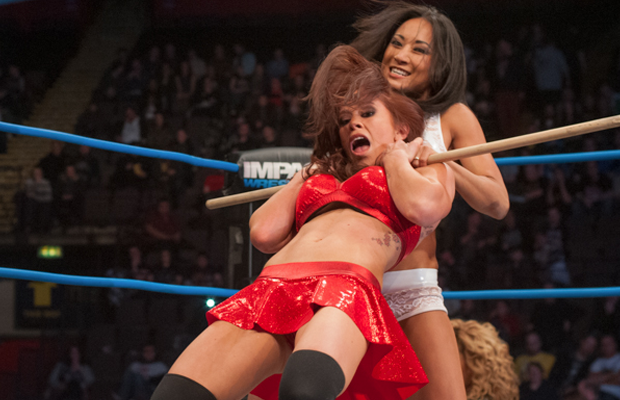 So I read this week’s Impact spoilers and decided to steal the Write-Up from Chris. How could I resist a Knockouts street fight? Okay, so I’m actually just filling in for him, but you can’t prove I didn’t purposely preoccupy him so I could take this.

We kick off the show, as we often do, with Dixie Carter. She, through Magnus, accepts MVP‘s challenge for a Lethal LockDown match for control of TNA:

Later, Dixie would convince Bobby Roode to not quit and captain her Lethal Lockdown team by offering him a 10% ownership of TNA if Team Dixie wins:

We also saw Christy Hemme‘s Investigation Discovery special Sam Shaw problem kick into high gear. All in one episode, he steals her broken mic pack, watches her from the shadows and finally renders her unconscious, carrying her to a room and ominously chasing off the camera man:

I’m not sure what’s more disturbing: Sam Shaw’s acting or the fact that the announcers watch all of it go down and more or less say “okay, moving on…” You know Jim Ross would be be saying “Bah gawd!” about it, at least.

As for the Knockouts action, we saw a backstage fight between Gail Kim and Knockouts Champion Madison Rayne turn into a sanctioned street fight. Hell yeah!

Just as Gail makes her entrance, Lei’D Tapa in tow, Madison makes a beeline for her, attacking her with a baking sheet. The two fight their way into the ring, Madison eventually dropkicking the baking sheet into Gail’s face. Madison goes for the pin, but Gail kicks out.

Madison takes a bigger baking sheet and sets it up in the corner, attempting to run Gail head-first into it. Gail puts on the brakes, though, sending Madison to the mat with a series of kicks. She grabs a stick and chokes Madison with it then bowls her over with it aimed at her throat.

Gail goes for a submission, but Madison catches her turned around, putting a boot to her backside and sending her head-first into the baking sheet. One well-placed kick sends Gail falling out of the ring. Madison goes to leap on her from the ring apron, but Tapa puts herself between them. Madison hesitates for a moment, then leaps onto Tapa, catching her in a choke hold and swinging her legs around, connecting with Gail’s head.

Tapa eventually knocks Madison off of her, slamming her back-first into the ring apron. Gail take the opportunity to take the prone Madison and lock her into a figure four leglock around the ring post. She breaks the hold after a bit, grabbing a steel chair and prepping to smash it against Madison’s leg. Madison moves out of the way in time, though, and kicks the chair right in Gail’s face.

When both women make it back into the ring, Madison spears Gail. Tapa’s seen enough, and enters the ring. Madison arms herself, hitting Tapa with the baking sheet and the stick before trying with the steel chair. She preps to take the shot, but out of nowhere comes Gail with the Knockouts Title! She clocks Madison in the back of the head with it, and it’s enough to get the pin and the win.

Note: The following was written before the announcement of Gail and Madison’s Steel Cage match at Lockdown.

That match was definitely shorter than I would have hoped, but it sets up a lot of possibilities for Gail and Madison’s future, namely Lockdown. At first, I thought I would have chosen to save the street fight for the Pay-Per-View, but when I think about it, I can see this being a stepping stone. After all, Gail had a Last Knockout Standing match and a Ladder match within one feud last year, so it wouldn’t surprise me at all if TNA books a “hardcore” stipulation for these two at LockDown, hopefully in a fashion that neutralizes Lei’D Tapa.

Will we see another Last Knockout Standing match, or will TNA branch out a bit? They’ve already got both a Steel Cage and Lethal Lockdown match, so maybe something that requires less hardware. Either way, I’m sure TNA will up the stakes. After having a street fight on Impact, how could they not?