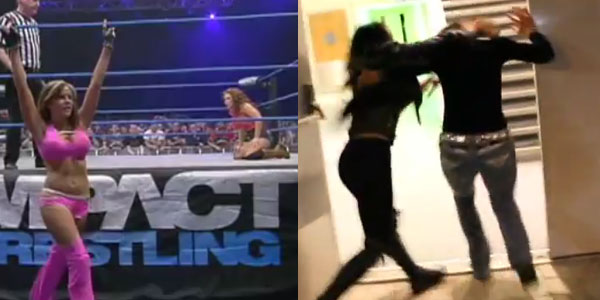 Greetings, you joy filled bitches, and welcome to another week of Impact recapping. On tonight’s big show, we continue on the journey to Against All Odds as TNA invades the United Kingdom for its second taping before heading back to the States. Tonight’s episode brought us a rare friend vs friend match up between Mickie James and Velvet Sky, and we also got to see a kickass segment involving the #1 Contender to the Knockouts Title, Tara, and the woman who holds the gold, Gail Kim! This is sure to be a night for all to remember, so let’s get into the swing of things and two step our way on in to this recap.

First up, we are taken outside the arena as the Knockout who challenges for the title this Sunday, Tara, takes us on a video journey through the streets of London. She welcomes everyone to Wembley Arena and praises the ravenous fan base located inside. From there, Tara attempts to record some of the fans walking by her until she is cut off by Gail Kim out of nowhere! Kim poses the question, “How’s this for home footage?!” before striking Tara across the face! The two begin to fight on the sidewalk, as the people walking by don’t seem phased at all for the sight of two women kicking the crap out of each other. As I continue to sit here amazed at their ability to walk by, Gail shoves Tara through an entry way and the two tear each other apart throughout the arena! Kim finally takes Tara down and then proceeds to viciously slam her challenger through a set of doors. She slyly turns to the camera and asks how that was for some home footage… courtesy of Gail Kim!~ Gail walks off, as the camera crew quickly rushes to Tara’s side and offers their help, I’m assuming.

We proceed to head out to the arena, where resident red head Christy Hemme announces the following contest is scheduled for one fall. (Ahem… warming up vocal chords.) HAAAARRDDDDCURRRRRR COUUNNTREEHHHHH blasts throughout the building, and out skips fan favorite, Mickie James. She slides into the ring and poses for the fans, before the music of much beloved, Velvet Sky begins to play. She steps out in her finest pink gear, as these two friends get ready to square off in a treat for the London crowd. Impact plugs the Twitter of my benevolent TNA ruler in Miss Karen’s absence, Aunt Dixie Carter, whom you should all follow now, while the bell sounds and we get started.

The two circle around the ring for a bit before a few “Velvet” chants break out and they lock up. Mickie and Velvet exchange advantages, before Velvet applies a wrist lock that Mickie cartwheels out of and drops into an arm drag pinfall for a one count. James keeps the hold locked in, but Velvet reverses it into a side headlock. Mickie with a quick reversal into a pin for a one count, before transitioning back into the hold until James can send her off the ropes. Velvet with a shoulder tackle, as she follows up by leaping over Mickie and then ducking under a leapfrog from the country gal. Mickie goes for a rolling kick, but Sky catches her early on and hoists her up into a hip lock for a near fall.

Mickie slides out with a bridge and connects with an Oklahoma roll for another two count, which brings the two to a stare off and applause. Velvet extends her hand as Mickie goes to shake it but reverses into a wrist lock to boos! Ruh-roh! James sends Velvet into the corner, but Sky comes back with a boot to the face and springs off with a whirlybird headscissors. Sky charges off the ropes, although Mickie sweeps her under the legs and runs forward herself with a baseball slide dropkick for a few close counts. This does not set well with Mickie, as she begins to display a bit of anger!~ Mickie takes Velvet into the corner and goes to town on her with shots and kicks galore. The crowd tries to get behind Sky, but James snapmares her over and locks in a submission hold to trap the arm and work over the ribs.

Applause from the crowd tries to get Velvet back to a vertical base, but Mickie rolls her up for another two count. Sky finally fights back with a jawbreaker, following it up with a series of clotheslines until she is cut off with a spin kick from Mickie. James goes for an Irish whip, but Sky reverses it into a neck flip type move for a near fall. Velvet tries to set Mickie up for a pair of jawbreakers, but ends up paying the price as Mickie scores with a clothesline. Mickie goes for the Mickie-DT, but Sky counters into an attempt for the Sky High… but Mickie hoists her over and she goes for a sunset flip. James smacks her hand away and attempts to pick her up, but Velvet quickly rolls her up out of nowhere for the victory!

Velvet celebrates her victory, as Mickie James begins to make a pretty scary look on her face following the loss. Nonetheless, Sky walks back up the ramp and slaps a few hands on her way, while Mickie continues to seem upset at the fact that she didn’t defeat Velvet… Interesting!

Thoughts: This was a pretty interesting show for the Knockouts of Impact Wrestling. Beginning with the segment between Gail and Tara, I thought it was extremely well done and hats off to both ladies for that brutal brawling in the street. Even if nobody stopped to see what was going on, it was still a great segment to add some fuel to the fire for their big championship match Sunday, and I’m elated that they weren’t simply forgotten about on tonight’s show in favor of the match, but got some shine as well.

The match was pretty fun to watch for me. It had a few moments where they seemed to get a little step off, but I’ve heard before that it’s challenging to work a match where both people are the same disposition, so I don’t really see any reason to fault them. I wasn’t sure how this match would come off on TV in terms of any signals of a heel turn, but it definitely looks like my pride and joy from the south is about to turn on us loyal Hardcore Country-men and women. Mickie definitely showed signs of an upcoming heel turn, and I could not be more excited. She needs to be rejuvenated character wise in my opinion, solely because while she is extremely popular, you just need variety every so often so you can continue to evolve. I like Mickie a lot, and I think a heel turn would be perfect for her. Very excited to see what develops between these two in the future.