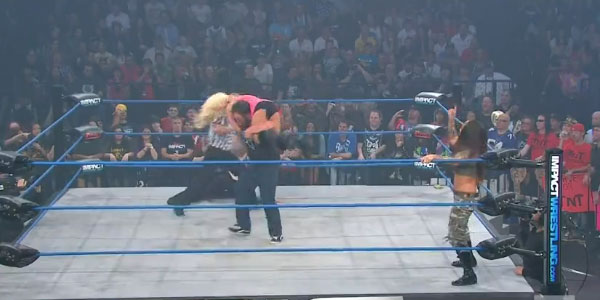 Greetings loyal minions and/or prostitutes, and welcome to another chilling edition of your Impact Write-Up. I come to you this week without having watched the program already, so you shall be getting my immediate reactions to what goes down with the Knockouts. Tonight, we have ODB with Creepo Beard in her corner taking on Winter with Angelina Love in hers, plus a few segments to enjoy backstage with those mentioned above, as well as Madison Rayne. So without any further ado, let’s get things started!

First we head backstage to see Winter and Angelina Love chatting it up. Winter claims that all the drama in the Knockouts Division about looking for a new leader (which took me a few times to understand she wasn’t saying Lita), is ridiculous. She dubs Gail Kim a twerp that thinks she can come in and take over, and says that she thinks it’s time that people remember who Winter was. She’s a former two time Knockouts Champ for crying out loud! Tonight, when she faces that Old Demented Broad, and her little boy bear, people will never want to forget again. Angelina then interrupts and says it’s also time people remember who she is, being a former five time champion. As far as the match with ODB, they agree that they have this down, as Angelina twiddles with Winter’s hair. The two ladies then head out to the ring and get things underway. A video package promoting ODB and Creepo Beard then follows.

Backstage once more, ODB and Creepo Beard are seen arguing about the kiss, which she claims she was just hot and horny. ODB walks off and then returns to slap him on the ass and drag him along for her match. We then head to the ring where Christy Hemme announces the following Knockouts Contest and out comes Winter and Angelina to the greatest theme song ever. After some in ring poses, the pumped up tunes of ODB hits, as she makes her way out in her finest camo alongside Creepo Beard. They step into the ring as Creepo locks up with the referee and becomes the Santino of our prized Knockouts. The bell sounds, as ODB hands her lime green flask off and we get started.

They lock up to some ODB chants, as Winter backs into the ropes. Winter with a waist lock, but ODB breaks it, slaps her ass and boobs, and then charges forward with a chest bump. She goes for the bronco buster, but Winter moves out of the way and drags ODB out of the way, before locking her in a tree of woe. A stern boot to the face causes ODB to spit into the ring, as Creepo Beard tries to get inside the ring. Winter pulls ODB by the hair ont the outside, before sliding in and taking control with a sleeper hold until ODB breaks it and takes Winter down with some shoulder blocks.

She Irish Whips Winter into the corner and avalanches her, before finally being able to hit the Bronco Buster, followed up with the Fallaway Slam into the Kip Up. Angelina then slides into the ring, but Creepo Beard steps in and Airplane Spins her to send her outside. The referee then sends Creepo out of the ring, as Winter tries to grab ODB from behind, but ODB reverses it into the “BAM” which is a TKO. ODB covers and scores the victory, as she and Creepo Beard celebrate to Winter, (my) and Angelina’s utter disgust.

Sting is backstage about to give a press conference it seems, when Madison Rayne interrupts him and asks how he’s doing. She compliments him, before stating that she wants to talk to him for a second; dubbing she was overzealous to assume the Knockouts V.P. role too soon. Rayne asks him to make it official, and he overreacts sarcastically, before saying he can not do that. Madison claims when there is a job to get done, she gets it done…which Sting relates to her helping Gail cheat to retain her title at Genesis. He then decides to book Madison in a big steel cage match against Mickie James next week! Madison tries not to panic, but Sting refuses to change his decision and she FREAKS before calling out for Gail to help her!

Thoughts: It’s so great to see Winter and Angelina back on television. I think it had been over a month since that car wash segment with my ruler, Miss Karen, but I like that they used Gail as their reason for not being on in such a long time. I know the feud before was about Miss Karen vs. The Knockouts, but I think it could translate nicely into Gail and Madison against the roster since they all have reasons to dislike the two. The match was fine for what it was, and I loved seeing ODB and Winter go at it to throw me back to their OVW feud, but I really don’t like Creepo Beard because he just reminds me of a worse version of when Santino used to be involved in all the female matches. I like that they still got a nice time, but when he’s randomly running into the ring every five seconds, it’s hard to keep focus on the match. I know a lot of people love the two, and I get that, but I’ve never really been a fan of his, so it just doesn’t warm to me. But opinions are different for all, and so I am glad to at least see the focus being given to some forgotten faces for the time being.