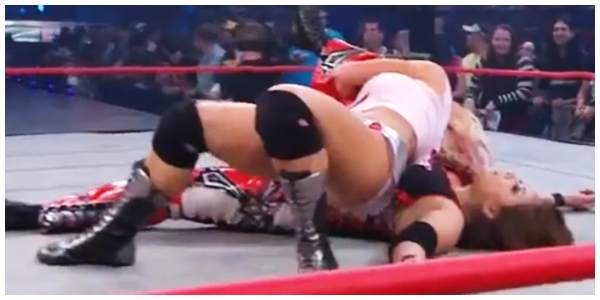 All I have to say is thank God for the fast forward button. I thought I could be strong and sit through an entire episode of Impact tonight but man, was I ever wrong! It’s truly an excruciating show to watch and I literally watched the whole thing on fast forward until it came back from commercial break and we were treated to a shot of the Beautiful People backstage getting ready for their six woman tag team match. The brief segment (and when I say brief, it seemed less than thirty seconds!) was nothing more than two of the Beautiful People stretching each other out and the third standing in the middle looking like a little lost puppy. It doesn’t take rocket science to figure out who is who. Mike Tenay mentions that the Beautiful People will be in action later on tonight against the Knockouts Champion and Tag Team Champions, so of course I’m forced to sit here and fast forward through more garbage; aka old men desperately clinging to one last shot at glory they do not deserve. Blah.

I’m not one who reads spoilers so I was surprised to see that the Beautiful People actually got an interview. Christy Hemme made mention of the match but instead of asking them about their opponents, she asked them about Angelina Love. Velvet Sky spoke first and said that Angelina makes her sick and she’s just so tired of hearing about her. Velvet basically ripped on her former BFF and claimed that Angelina just wasn’t cut out to be a BP so that’s why she got to steppin’. Unfortunately Madison Rayne decided to talk next and she made me LOL IRL. Apparently Angelina Love is so 2009 and the Beautiful People have moved on to bigger and better things. Kudos to Madison and Velvet for keeping straight faces through that preposterous comment. Madison talked about how the Beautiful People were aiming for gold and rubbed her waist to signal that’s where it would it up going. I absolutely refuse to repeat the rest of the segment because I firmly believe everytime Lacey Von Erich speaks God kills a kitten and I just don’t agree with animal abuse.

We finally get to the match and the Beautiful People are out to the ring first with a horrible choreographed ring entrance. As cute as their pink outfits are, their antics just aren’t this week. I hated von Erich’s awkward flip over the top rope and I when I went to pause the match to dissect the ring entrances, I paused on a shot of Velvet’s bottom which does absolutely nothing for me. Madison’s hair looks absolutely terrible and in my opinion, Velvet just doesn’t seem to have as much fun anymore. Awesome Kong and Hamada make their way out next and if this is truly Awesome Kong’s last match in TNA, I’m sure going to miss her. She’s got the best entrance music ever and it just scares me to see her stalking down towards the ring because I sure wouldn’t wanna face her! Tara gets a nice reaction from the crowd and I chuckled at seeing TBP freak out over the spider.

The match gets started pretty quickly with Hamada and Madison Rayne. There’s not a whole lot of messing around at the start of this like there was in last week’s match and that’s always good to see. Hamada takes Madison to the mat with a wicked kick and doesn’t let up on her offense by chopping the pink and blonde headed beautiful person. This continued for a few moments before Hamada decided to unleash her inner Undertaker and do his “Old School” type of move by walking on the top rope while hanging onto Madison’s arm. Hamada put her own twist on the move by flipping down and executing a weird looking arm drag to which Madison bounced back up from. Madison is able to make the tag to Velvet, who stayed in the match for approximately two point two seconds before tagging out to LVE.

LVE worked Hamada’s arm for a nanosecond before tagging out to Madison. Madison kept up that attack on Hamada’s arm but the Japanese sensation rolled through the move a couple of times and she was finally able to take Madison down with a drop toe hold. Hamada tags out to Tara and the Knockouts Champion takes it to Madison Rayne with some impressive offense. Tara’s momentum got interrupted when Madison whipped her into the ropes and Velvet landed a kick to the kidney area. The Beautiful People took control by keeping Tara in their corner. Madison tagged out to Velvet and after taking a few shots on Tara, Velvet decided to distract the referee.

Now you would think that the Beautiful People would seize this opportunity to double team Tara, but that didn’t really happen. While Madison cheated Lacey stood there dazed and confused, as if she couldn’t decided whether or not she was supposed to help. When it finally dawned on her that she needed to get involved it was already to late. Tara reversed a whip by Velvet and both women came flying at each other only to be taken down. Velvet got the tag and Kong came in for the Champions’ team. Madison and Lacey went for a double team clothesline on Kong but the powerful Tag Champ took both women down pretty hard. Hamada got back in for her team and disposed of the Beautiful People one by one. Things got crazy here, like most tag matches do, and Tara managed to lay out Lacey. Hamada went to the top rope and hit a pretty moonsault on von Erich, but the referee was too wrapped up in getting Tara out of the ring so Hamada’s effort, as well as her cover on Lacey, basically went unnoticed.

On the outside of the ring, Kong chased Velvet Sky away while Madison got back in the ring. She was holding the ugly stick and nailed Hamada with it. Madison went for the cover and picked up the win over Hamada for her team. Lacey and Madison celebrated their victory together and decided to beat down Tara afterward. Angelina ran down to the ring to make the save and she kicked the two remaining BP members to the curb.

It’s weird for me to see Angelina as a face in TNA. She was the top heel in the company for so long and she just absolutely thrived in that role. It was surreal and a bit strange to see her coming to Tara’s aid and hugging her at the end, and I don’t understand why wrestling storylines go this way. If I were Tara I wouldn’t want Angelina hugging me. Angelina made Tara’s life hell for so long and just because she’s supposedly turned over a new leaf doesn’t mean I would trust her. Wrestlers are always so quick to “forgive and forget” that sometimes it just loses realism for me, and that’s how I feel with Angelina and Tara at the moment.

I really don’t think the match was that bad. It was way better than last week’s offering that’s for sure. I find Hamada bit boring and dull, but I appreciate her style of wrestling and it’s definitely different from what we’re used to seeing. LVE took some nice bumps tonight and Madison seems to be emerging as TBP’s go-too gal in terms of wrestling. She’s not the best by any means, but she’s better than Velvet and hung in there nicely. The lack of Kong in this match is frustrating. She deserves so much better than what TNA has given her but at least she didn’t have to take the pin. I really hope she works things out with the company and that this match isn’t her last in TNA. Overall I can’t say I’m satisfied, but I’m definitely not disappointed. It furthered the storyline between the Beautiful People and Angelina Love, and made the Beautiful People tag team championship contenders seeing as how Madison pinned Hamada. It’ll be interesting to see where the Knockouts division goes from here.

Food for thought: What roles are Awesome Kong & Hamada supposed to be playing? Heel? Face? Tweener?