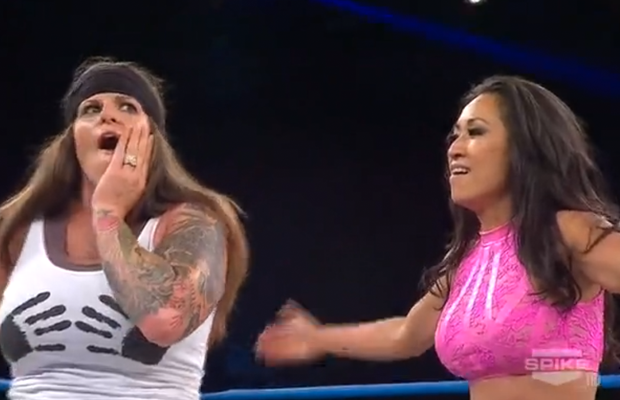 Hi hi Knockout fans. Mickie James‘ title defense against Gail Kim arrived last night and was action packed. I shan’t bore you with a longer introduction, so let’s get right into it.

Our referee, ODB, is already in the ring as Gail Kim’s music hits. She’s pretty in pink this week. Here comes my number one, the Knockouts champ! She’s excited, I’m excited (actually I’m pretty mellow; it’s nine o’clock in the morning and I’m still a bit tired), the crowd’s excited; even Christy Hemme sounds excited. Looks like we’ve got company too as the camera cuts to ringside, where former Knockouts champ Velvet Sky is shaking her head at Mickie. Throwing some shade there, Velvet? My, my.

The bell rings and the ladies lock up. Gail gets the upper hand with a take down on Mickie, but Mickie’s back on her feet in no time. Mickie now with the take down to Gail, and now it’s all hair pulling and bad mouthing! Both bitter after their encounter last week, neither Gail nor Mickie is breaking the hold so ODB has to get in there to break them apart.

They lock up again and Mickie drives Gail into the corner. She traps her there with a kick to the mid-section. ODB pulls Mickie out of there, giving her a warning, and Gail manages to capitalize with what looks like a thumb to the eyes, but she’s not disqualified so who knows. Gail has Mickie in the corner now, returning the favour with the kick to mid-section, followed up by some hard blows to the head. In the meantime ODB is warning Gail to back off, so Gail gets in the refs face and starts shouting at her. With Gail now being the one distracted, Mickie hits a shot between the eyes on her opponent, gaining the upper hand.

Gail fights back, locking the Knockouts champ into an arm bar. Mickie tries to fight out but Gail catches her hair and slams her head first into the mat. Gail goes for the first cover of the match, but only get a count of one. Gail with another pin attempt and another one count. After some back and forth, Mickie gains control and drops Gail to the mat. Mickie with a low drop kick to the face that earns her a two count. Gail and Mickie exchange head locks, Mickie trips Gail but Gail avoids a drop kick, leaving Mickie in a heap on the mat.

Gail hits a picture perfect drop kick of her own, followed by a big clothesline on the champ. She goes for another pin and gets a two count, slowly wearing the champion down. Gail rolls Mickie up but has a fistful of ropes that ODB spots before she hits the three count. ODB scolds Gail, but Gail’s happy enough to challenge her and get in her face. While Gail was busy challenging the ref, Mickie was pulling herself together on the mat and hits Gail with a big right hand. Mickie has Gail in the corner now. Following a kick to the mid-section, Mickie tries and Irish whip but it’s reversed by Gail, who charges at Mickie and hits her hard in the opposite corner.

Gail laps up the attention from the fans, even blowing them a kiss from the ring apron. But it costs her. Mickie hits the Long Kiss Goodnight so send Gail to the outside. Mickie looks spent in the ring but she’s counting to ten with ODB, likely hoping that this match ends via count out because if there’s anyone that can push Mickie to her breaking point, it’s Gail Kim. Gail makes it back in on a count of eight, but Mickie’s waiting for her. Gail bounces Mickie onffthe ropes and drag her out of the ring, going for the figure four leg lock on the ring post. We’ve seen this before!

Mickie avoids it and Gail hits the floor. Just as she’s back on her feet, Mickie hits a press from the ring apron! ODB demanding they get back in the ring and Mickie follows suit, rolling Gail in first. Gail goes for a right hand but Mickie blocks and counters it into a neck breaker. I have to say, I really like the neckbreaker as a move. Not that I’d want to be on the receiving end of it.

Mickie gets a two count, then goes right back for another cover, only to get another two count. Mickie goes for the Mickie-DT, but Gail counters and goes for the Eat Defeat. Mickie counters again and hits a one woman flapjack. Mickie climbs to the top rope but Gail is back on her feet already and dodges a press attempt from Mickie. Gail flies around and locks in the Christo, but not for long as Mickie reaches the ropes, then locks in a submission attempt of her own. ODB is right on top of the action and calls for Mickie to break when Gail gets the ropes. Gail delivers a kick right to the side of the head, then drags her opponent into the corner.

Mickie tries to fight out but Gail catches her, delivering a sick powerbomb to the champ for what could have been a three count if ODB hadn’t caught Gail with her feet on the ropes. Gail gets in ODB’s face again and it doesn’t look like ODB will take much more of it. Mickie whirls Gail around and hits a loud right hand. Gail manages to counter and throws Mickie outside the ring, where Velvet is waiting to trash talk her. Meanwhile, Gail and ODB get in each other’s faces again, with ODB pushing Gail away and Gail hitting back with a slap to the referee. Isn’t that a disqualification? Doesn’t matter! Mickie slides in and rolls up a distracted Gail Kim for the three count. Mickie retains!

Gail Kim and ODB are having words in the ring, and Gail has a face like thunder. They’re about to go at it when Brooke Hogan arrives on the scene: ‘Yo, I’m talking to you!’

ODB is ready to go but Gail is having none of that! She marches out of the ring as the crowd gets behind ODB.

Thoughts: Well, first off, why was Velvet Sky ringside? Apart from talking some quiet trash about Mickie – which Mickie paid no attention to – and shaking her head at the champ before the match started, she didn’t do anything. Are they going back to a Velvet/Mickie feud? I hope not.

ODB and Gail Kim. This is interesting, especially if this is the end of Gail/Mickie for now. We could have two separate Knockout feuds on our hands, which is a good thing obviously.

Liked the match, thought it was very physical and a great display of how well these two can work together. I wouldn’t mind at all if they continued the Gail/Mickie stuff and added ODB into the mix. It’s about time ODB got a shot at something other than a striped shirt. Don’t get me wrong, it’s great that she’s consistently been on TV, but I want her back in the ring to kick some ass.

See you next week! Eleri out!