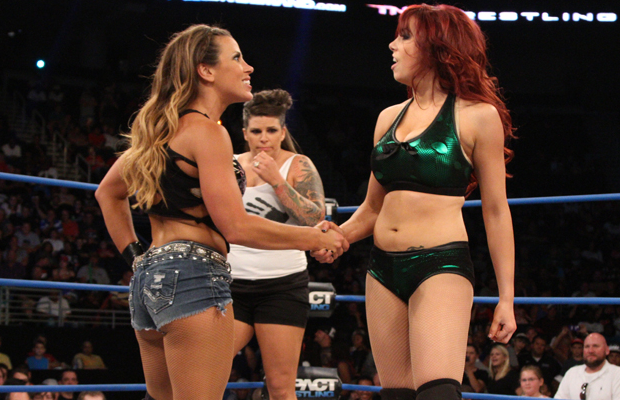 Hello there everyone, and welcome to this week’s Impact Write-Up. Let me soothe the pain first and foremost as if you’re reading this and didn’t check out the Slammiversary recap, you may have missed the news that I’m officially taking the Impact Write-Up back over! …for this week. (I wouldn’t deprive you of Eleri for too long, don’t worry) It appears that someone higher up in TNA did see that message, because for some reason the week I’m scheduled for the write-up, we get both Taeler Hendrix and the introduction of a Knockouts Scratch-off Lottery Ticket! If you know me well, you know I thrive on my scratch-offs, and while I’m unfortunately in the wrong state to buy this one, it’s still pretty insane to know you could walk into a Georgia convenience store and see both Gail Kim & Velvet Sky staring back at you by the register.

Alright now that I’ve gotten my excitement for the Knockouts scratch ticket out of the way, let’s get down to business. Tonight, we had lots of Mickie James and truthfully I wouldn’t have it any other way. Aside from getting a match between she and Taeler, we also got a really fun backstage segment alongside Velvet Sky, and even one involving Mizz Brooke Hogan and Taryn Terrell to provide some nice follow up from Terrell’s tremendous match against Gail Kim at Slammiversary. Being that I have nothing else to add that wouldn’t take away from the “thoughts” portion below, we’ll get started right about now!

We kick off the festivities with an appearance by the one and only Velvet Sky! She appears to be in her gear, which to me signals that she’ll be competing against… well speak of the champion (I cannot dare refer to Mickie as devil, apologies all), here comes Mickie James into the equation. She offers Velvet up a present in the form of her very own Impact Wrestling Georgia lottery ticket! (One last thing, I’ll shout out anyone who buys one and mails it to me.) She tries to explain what happened last week in that she just felt like she was in a movie with everything surrounding her moving in ridiculously slow motion to where it leaves you frozen and unable to focus.

She wanted to do something, but before she could even budge, out came Taryn to completely shaft her moment to save the day… just like she stole their match at Slammiversary. Youch. Mickie apologizes for what happened, but Velvet doesn’t really seem too thrilled. She shrugs it off and claims it is what it is, but she wants her rematch tonight. Unfortunately Mickie already received a match from Brooke Hogan, and it’s against someone Sky neglected as champion! As she walks off, she babbles that once Velvet’s healthy enough she should let her know and they’ll certainly have that match! Sky attempts to defend her case, but before she can get a word out, Mickie’s already left the room and begins heading to the ring.

As we return from a break, Brooke Hogan is seen praising Taryn’s performance at Slammiversary. Taryn cements that her main goals going through her head during it were the animosity they had for each other leading up to it, as well as the fact that she wants to be Knockouts Champion and Gail Kim was standing in her way of doing that or being taken as a legitimate threat for it. The conversation then shifts to Brooke’s relationship to Bully Ray, but Brooke walks around answering that and reverts it back to Taryn and the roll she’s been on as of late. Terrell apologizes and walks off while in gear as Brooke says good luck, but I’m curious as to for what?

Annnd out to the ring we go to that oh-so familiar pan-up shot of Christy Hemme just like old times. Haaaaaardcore Country hits the speaker system and makes me happy, as Mickie James skips out to the ring looking insanely great, posing with her title on the ring apron and getting ready for some competition. Suddenly, some unfamiliar music hits as the tron lights up with the words “Taeler Hendrix”… what?! I feel like one of those safari show hosts who just spotted a rare animal and they need to take a few moments to get it on camera in order to prove this actually happened. A wild Taeler Hendrix steps out from behind the curtain, thus cementing that my eyes were not deceiving me and also making me incredibly excited at the same time that TNA has finally brought her back in!

Taeler slides through the ropes into the ring as Mickie politely claps for her challenger and lets out a huge smile. James looks very excited for this as well, with the bell ringing and both locking up. Mickie backs Taeler into the corner, but then gives her a thumbs up and gets the crowd to clap along. Another lock up as Hendrix applies a wrist lock that Mickie cartwheels out of using her free arm and reverses into one of her own. Taeler kicks out to break it and then proceeds with a fire(wo)man’s carry. She takes a moment to pose, as Mickie continues to kill me (in a good way) by applauding her once again and rallying the crowd up. James now applies a headlock that Taeler tries to fight out of unsuccessfully at first. Finally, she sends Mickie off the ropes, but James takes her down with a shoulder tackle.

Hendrix flips over as Mickie runs off the ropes, allowing Mickie to cartwheel out again and goes for a clothesline that Taeler matrixes under and hits a dropkick! Hendrix gets a two count and taunts Mickie that she was this close to getting a huge upset victory, but all Mickie can do is keep her composure, let out that big smile, and agree it was almost over. The crowd erupts into a “Yes” chant while the two women shake hands in support. James with a waist lock, but Taeler breaks it and gets sent into the ropes. She stops herself from rebounding and as Mickie charges forward, delivers a swift kick to the abdomen. Hendrix now heads up top, but Mickie starts grabbing her knee as if it’s in pain. Taeler now hops down and looks concerned, but Mickie plops out a huge fist to the jaw and then drops Hendrix with the Mick Kick for the win! Despite her underhanded tactics, James seems to stick to the story that her knee was tweaked and simply plopped back into place now that the match is over.

Thoughts: Talk about a lot of refreshing things that went down tonight. First of all, I have to touch on Mickie James who I am absolutely loving in this new role. She’s not psycho, or your typical bad girl heel, but more so this mixed, unpredictable bag of fun that acts like a face and walks like a face, however shows signs of underhanded tactics and really makes you wonder where her allegiance lies. After being a straight up face for so long, she really needed this. To be honest, the division really needed this as well because it only strengthens things when you have a champion that’s showing a real character and different emotions, but not only that, gets actual TV time devoted to doing it in both their promos and during their matches. It’s perfect to me and I honestly can’t wait to see how far into this they take her by delaying the title rematch with Velvet, yet doing it in a friendly way. Mickie’s been on TV basically since 2005, and so being this captivated by her 8 years in really says something to the presence she has. If it wasn’t obvious, I can’t get enough and I’m so glad TNA seem to be devoting the strength behind this storyline with Velvet and incorporating the behavior into her matches. For me at least, it’s an absolute blast to watch her big smiles and crowd rallying.

Speaking of matches, hey Taeler Hendrix… long time no see. I’m still kind of in disbelief that she actually appeared on a non-Gut Check oriented night, and I’m trying so hard not to count on this being her official call-up so that I won’t get disappointed if things backfire again. But my inept skill for looking at small clues in things has me feeling happy that she has a titantron because really, why would you make a titantron for someone you weren’t going to use? (I know it’s probably happened before, but let me have this one). The match itself was pretty basic, but I have absolutely no problem with that because it told such an interesting story that held my attention for the full length and left me actually groaning when Mickie hit the kick because I knew it was over and wanted more. I’m going to be honest and say I don’t always feel that way when it comes to matches (by that, I don’t really mean Knockout matches, just some matches in general), so I guess that works as proof to myself that I was beyond invested in it. Mickie constantly getting the crowd to rally behind Taeler was perfect since she was basically using this match to avoid facing Velvet, and I absolutely love that she gave a reason for Taeler’s appearance in that she wanted to face someone Velvet neglected during her reign.

On the Taryn/Gail front, (keep in mind I’m going off this video so if something wasn’t shown here, I apologize) I’m not too upset we didn’t get any Gail tonight because it sells the after effects she faced in the brutal match with Taryn. We know what Taryn’s like following it thanks to the TMZ article, but Gail was still a mystery and I’d personally love it if they went a few weeks without really being like “What happened to Gail?” only for her to pop up when we least expect it. Also, am I the only one curious why Taryn was shown talking to Brooke Hogan in her wrestling gear with Brooke wishing her luck as she left? Maybe I missed something so if you guys saw anything I didn’t, drop a comment and let me know please.

That about does it for this weeks Impact. I don’t mean to spoil anything for those of you who hate spoilers, but next week we’ve got a certain female making her big return. That’s right, Eleri will be back with you, so force yourself to read this and just keep it in your mind that once you finish, you’ll be reunited with her in no time at all!