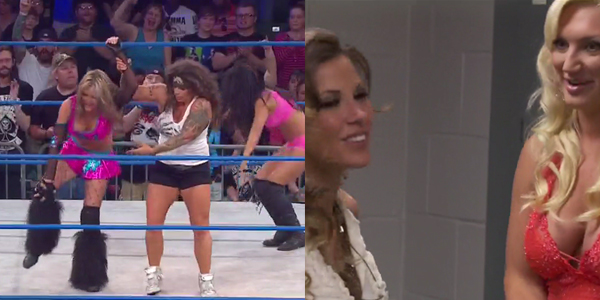 Hello, hello Knockout fans! Another week gone and another Knockouts match to sink our teeth into. Last night saw the recently-vicious Gail Kim take on the reigning Knockouts champion, Velvet Sky. Not only that, but we got a glimpse of my favourite lady Mickie James backstage with the VP of the Knockouts, Brooke Hogan.

In a curious order of events, we saw Gail Kim and Velvet make their way out for their match, which ODB is refereeing once again, and then we cut to commercial. When we came back, we were backstage with Mickie and Brooke. Wouldn’t it have made more sense to have the backstage segment earlier in the show? No? Alrighty then.

Mickie and Brooke are discussing the recent success of Mickie’s first album, and Mickie pipes up to say that she thinks she deserves to be in the spotlight far more than she is right now. Brooke explains that at Slammiversary she had to let Taryn and Gail knock each other about, because the Knockouts division was getting a bit crazy because of them. BUT, and this is a pretty big BUT, Brooke knows how much being on top of the division means to Mickie, and as such she grants Mickie another chance at Velvet Sky’s championship next week on Impact. Exciting times!

Mickie thanks Brooke, who tells Mickie to go and get herself ready for the match next week. Enter Bully Ray, who tells Mickie to ‘go get ready, girl! Go get ready!’ and I have to admit, I found that funny. He then corners Brooke against the wall and, among other things such as threatning Sting, he tells her that he will never file for a divorce until death to them part. Uh oh! Brooke tells him to, quite rightly, get out of her face and she storms off.

Oh Bully Ray, don’t you have a way with the ladies.

We cut back to the ring from there as ODB calls for the bell and we’re underway. Velvet takes control early on with some forearms to Gail. Velvet knocks her opponent down and then follows it up with a nice suplex. Some more forearms from out champion, and then a nice running bulldog! Velvet is looking good early on in this match. She sends Gail to the corner, then lays into her with repeated stomps to the mid-section. ODB intervenes and warns Velvet away, which she complies with. It looks like Velvet is taking a little too long to go back though, and I thought Gail would get the upper hand here. I was proved wrong as Velvet continues to look strong, locking in a head scissors and sending Gail flying!

It’s not long before Gail manages to switch things up a bit, as she catches Velvet in the corner, grabs her knee and snaps it down over the top rope. She floors the champion and looks pretty pleased with it. Velvet’s already not 100% with her knee still being a little banged up, so that will have done her no favours whatsoever.

Gail is in control now, working over Velvet’s knee. She pounds on it repeatedly, then snaps it over the ring apron. Velvet yelps in pain as Gail goes back to inflict more damage. Velvet tries to fight back but Gail is too much for the moment, and Gail knocks Velvet down once again! Cornering the champ, Gail wraps her leg around the ring rope and pulls on it hard, stretching it out and not in the good way. Velvet is trapped in the corner. Gail has yet to attempt a pin; her vicious side is coming out in waves in this match and, while I love to watch it, it’s definitely not good for Velvet.

After some more shots to the back of the knee, Gail locks in a Texas Cloverleaf as Velvet cries out in agony! Ouch! Gail is determined to punish the champion as the crowd tries to get behind Velvet and get her back into the match. It works and when Gail heads to the top rope, at high risk with Velvet now on her feet, Velvet seizes the opportunity and arm drags Gail right back down to the mat. Velvet gains the advantage only momentarily, as her knee gives out. She manages to set up for the In Yo Face, but Gail counters and tries to apply the figure four leg lock. Velvet counters that and then rolls up Gail for the three count! Velvet wins!

Gail is furious. She attacks Velvet from behind, shoves ODB out of the way and then drags Velvet over the corner. We know what’s coming next! ODB tries to intervene again but Gail shoves her away. Gail locks in the figure four around the ring post on a helpess Velvet Sky. By the time ODB manages to drag Gail off the champ, the damage may have already been done.

Thoughts: I liked this match. Gail rarely disappoints me (and I mean rarely) and this match was great for her. It was very physical and dominating her, and I’m loving this new, more aggressive side of her. She’s vicious and regrets nothing. She certainly inflicted some lasting damage onto Velvet, leaving me to wonder what condition Velvet will be in for her title defense against Mickie next week.

I’ve a feeling we’ll see Gail get involved somehow next week. At least I hope we do. Whoever wins or loses the match, I expect Gail to come on out and take out the winner. Then, for good measure, take out the loser too. That would take us into a possible three-way feud with Gail as a heel, Velvet as a face and Mickie as a tweener, because I’m pretty sure that’s where Mickie is headed right now.

Overall not a bad week for the Knockouts at all. It was nice to the lovely Brooke Hogan once again too, and to get a little bit of continuity in her storyline with Bully. I have no idea where that one’s going.

For now, Eleri out!