Impact Write-Up (October 11th, 2012): Before Student is Ready for Teacher, She Must Face Off Against a Past Foe 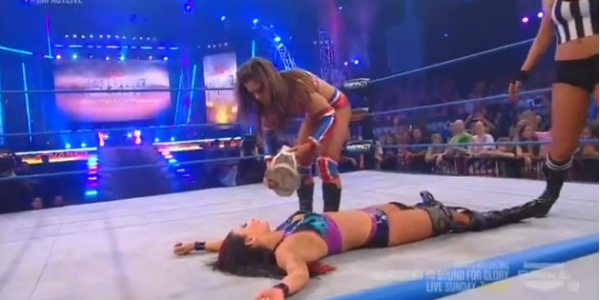 Greetings everybody out there in Impact fan world… at least I assume you are a fan of Impact Wrestling since you’re reading this. Tonight marks our final stop on the road to Bound for Glory, as Knockout Champion, Brooke Tessmacher faces off against Gail Kim in preparation for her impending bout against Tara at the big event this Sunday. Not only that, but we also get a little dose of the Widows Peak Freak herself, as she’s shown backstage in a segment with Brooke Hogan. So without any further ado, let’s get started!

We spot Brooke Hogan and Taryn Terrell backstage, as they discuss whether or not the stripe clad Knockout is ready to referee the high school drama type rage Tessmacher and Tara have between them this Sunday. Brooke claims she is “Tara-ing” her hair out over it all, which sparks a slight cringe from myself I can’t lie, yet a chuckle from Taryn. Suddenly, in walks Tara and out walks Taryn. She hands Brooke a media list that her Hollywood boyfriend put together of things she should be doing on Monday once she’s Knockouts Champion. Apparently the big hot shot boyfriend is going to be at Bound for Glory! Tara requests an A-List green room for the two of them, but Miss Hogan denies said request. She rips the list up, which seems to infuriate Tara enough to chime in with the brilliant line that “Kim and Khloe were so right about you”, in regards to the blonde Hogan. Brooke’s jaw drops as if she’s just seen an episode of Showtime hit Drama, Homeland, as this segment comes to a close.

Following the entrances of both Gail Kim and Brooke Tessmacher, as well as the weekly (now diagonal) pan up shot of Christy Hemme, the bell dings and we get started with this renewed grudge match. Well, the bell actually didn’t get to sound on time because Gail Kim is on the attack from the get go. She demolishes Brooke in the corner with some chokes, kicks, and a big clothesline to an assortment of boos from the crowd, as Brooke tries to make any sort of comeback to no avail. Thankfully, Brooke dodges a corner attack and takes Gail down, before snapping off a pretty nifty headscissors takedown. Gail lands in the corner, as Tessmacher backs herself up for the Ass-tastic, but Gail moves outside the ring. Brooke with a kick, but as she tries to capitalize, Gail snaps her neck first off the second rope and hits a sick front dropkick for a two.

The crowd gets behind Brooke, but Gail doesn’t seem to let that fase her as she bodyslams the champion down. A “Tessmacher” chant breaks out, which looks to piss Gail off even more with a choke on the ropes and a nasty clothesline on the ropes. Kim with a backbreaker on the knee, before continuing her dominance with an Irish whip into the corner. Gail scores with the sideways crossbody into the abdomen, but before she can continue, Tessmacher begins to fight back with a few shots. Gail takes her back down a notch with a kick and begins to hilariously rub her own bottom in Brooke’s face to parody the Ass-tastic. Kim runs off the ropes and attempts a front dropkick, but Brooke pretty cleverly catches her legs and catapults her into the corner. Brooke now begins her comeback with an assortment of forearms all over the place. She follows it up with an awesome move that I can’t even try to describe, before heading to the top rope. Gail stops this, and hoists the champ on her back, but Brooke escapes out the back with a roll up for a two! Brooke goes for a hurricanrana, and Gail drops her down with a sick sit out powerbomb! Wow! Gail heads to the top rope herself, and…

… Brooke rolls out of the way as Gail lands on her feet. She then takes Gail from behind with the Tess-Shocker for the victory! Before she can celebrate though, out comes Tara with the beatdown to her former best friend! Tara goes for the Widows Peak, but Brooke escapes and drops Tara with the Tess-Shocker as well! She then poses over her fallen teacher with the Knockouts Title, as we prepare for the grudge match at Bound for Glory!

Thoughts: A really great night for the Knockouts! Everything came off to perfection in my opinion. Gail and Brooke’s match might honestly be my favorite of all their bouts, or at least second. (Their first title match against each other needs a rewatch to judge.) The action was really fast paced and never seemed to skip a beat. It felt different from their other showings, and good lord at the sit down powerbomb Gail hit. I would say this is definitely a contender for TV match of the year so far, at least from my own personal enjoyment value.

The aftermath was also perfect to me. Tara has gotten the upper hand nearly every week, so it was only fair to give Brooke a little momentum heading into her title defense. I thought the ambush was so well executed with Tara pretty much going for the Widows Peak since it’s put Brooke down before and would serve as a sign for what’s to come, only for Tessmacher to show that she’s learning from her past mistakes of getting caught in that move by escaping and dropping Tara with her own. This is the first real storyline feud the Knockouts have seemed to have in a long time, and while I definitely would have liked more all out brawls between the two over the past few weeks, I’ve enjoyed what we’ve been given and really am looking forward to seeing what happens at Bound for Glory. Plus, who’s the Hollywood boyfriend? Will he play a part in their match? I honestly have a suspicion that it’s Eric Young (yes, of all people.) The whole Hollywood type angle plays in with his TV show he stars in (and I remember that one week ODB faced Madison he came out in a suit acting all high and mighty until she changed that fast.) It could be some big thing where it’s revealed he’s cheating on ODB, and who knows, maybe it could lead to the titles being vacated, or actually used!